Hey all. Pandemic reefer chiming in! I've been around here for a few months and wanted to share my personal reefing journey. I've only really been interested in aquariums since Jan 2021 when I set up my wife's desktop freshwater 5g nano. After that I was hooked and almost jumped in to getting my own freshwater tank...until I discovered the salty side. My own personal reef won me over pretty quick and before long I had ordered a tank!

I set up this Waterbox Marine X 35.1 Cube (22g DT, 11g sump) in July 2021. I've had quite a few ups and downs throughout its young life. I'll try to document the trials and struggles chronologically below.

Tank is all set up. Dumped in some fritz turbo start and powder ammonia. July 16, 2021
Added 2 clownfish and a few tester coral (zoa + GSP.) A few invertebrates (astrea snails, nassarius snails.) Spoiler: I kill the GSP later due to stupidly A) super gluing part of the wrong side (lol), and B) dipping in hydrogen peroxide trying to clean off a spec of algae. Much regret and lesson learned.
View attachment 96833

July 22, 2021
I pick up a few more coral. Also yes, that's a ball of chaeto sitting in the display. I get rid of it eventually. Gets everywhere. 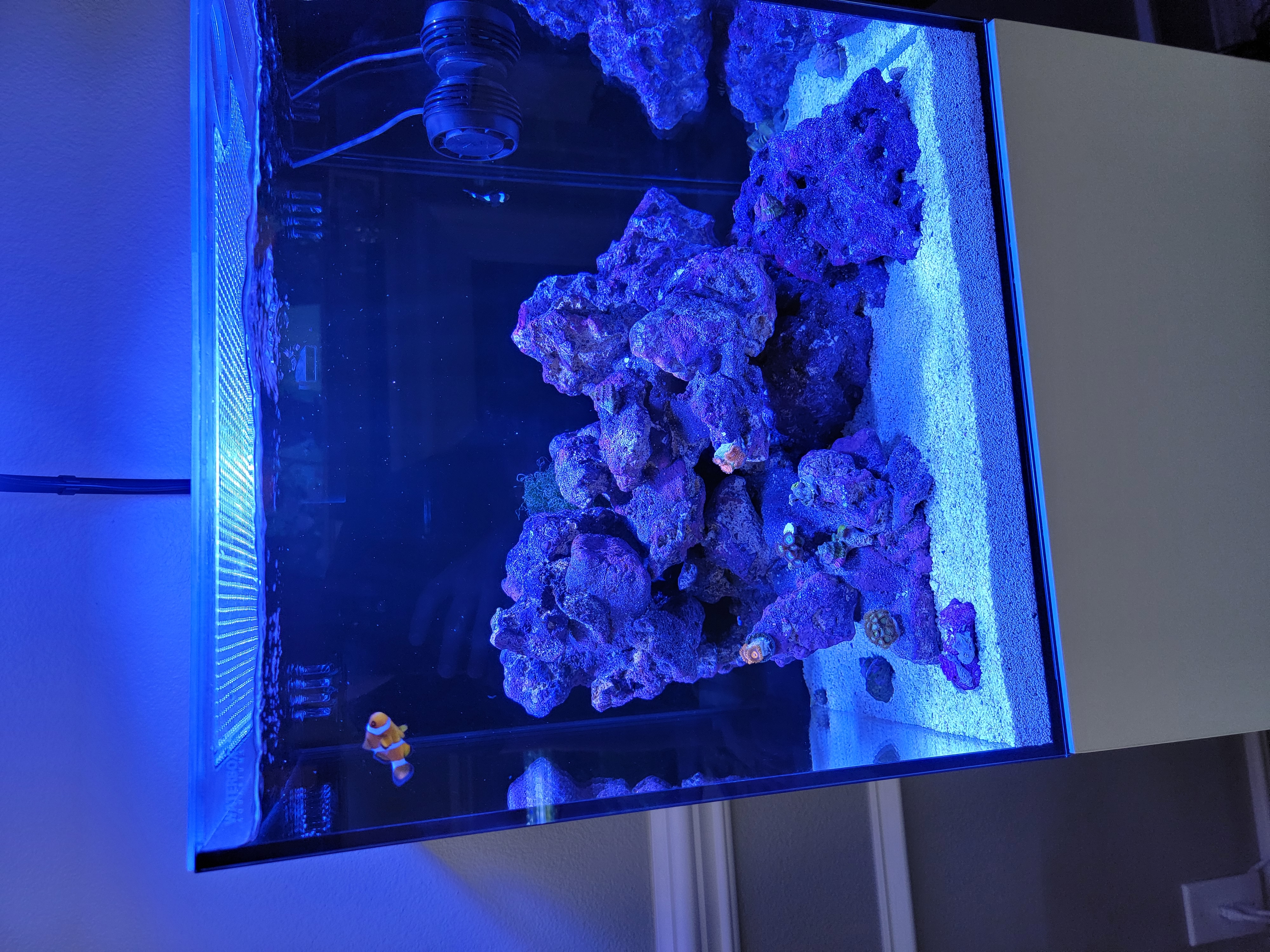 July 31, 2021
Things are going pretty well. Things are noticeably happy and growing. So I get a few more coral. Why not?!

At this point I've noticed for a week or so white stringy poop on one clown and then next week the other. It doesn't go away, changing fish food (frozen/dry variety) doesn't seem to help. I decide to use Fritz Paracleanse in a quarantine tank. 5 days later, they're stringy poop free and back in the display. 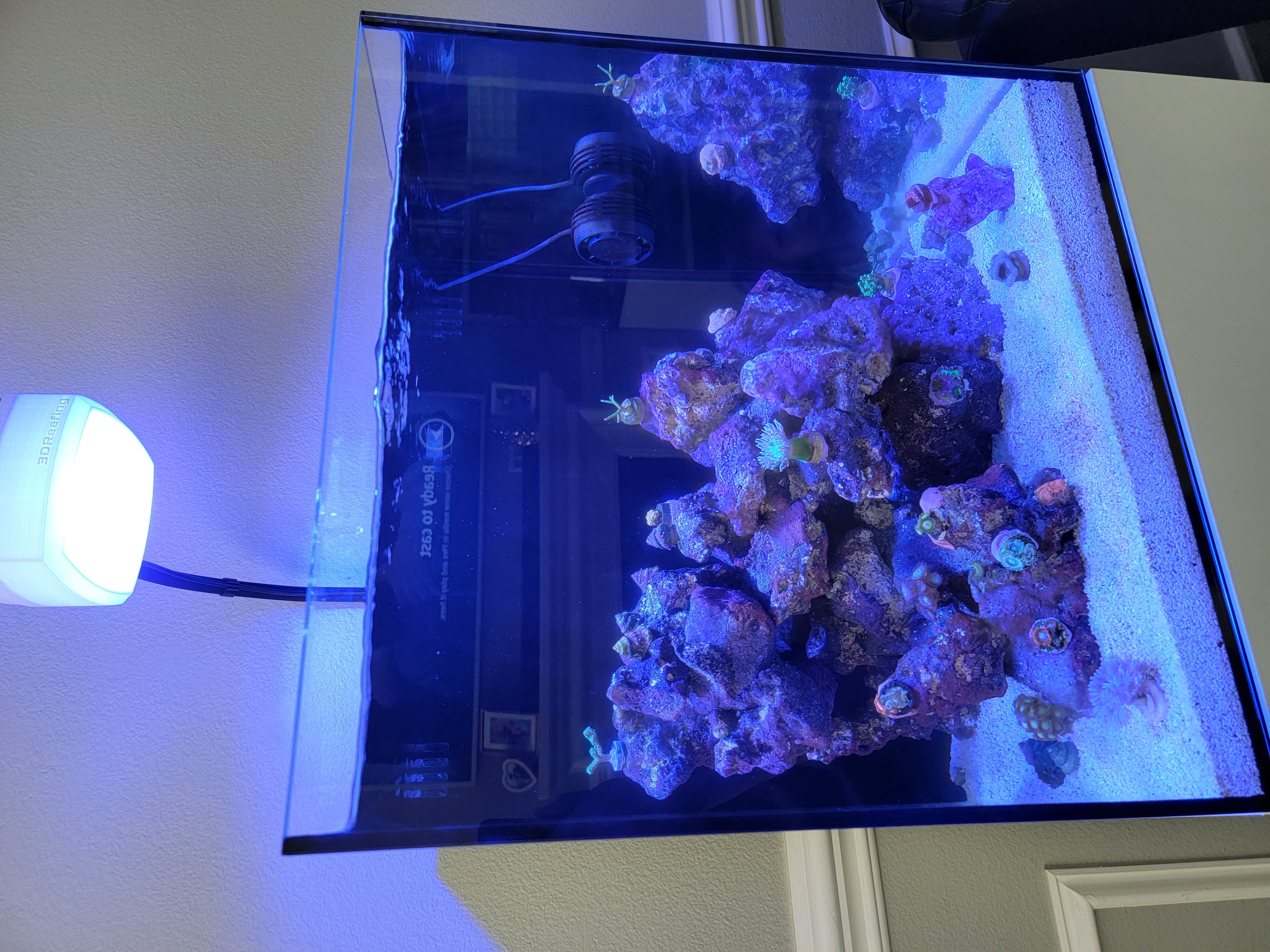 August 12, 2021
Things are going fantastic. Some diatoms on the sand, but nothing my CUC isn't taking care of easily. Everything is so well I decide to take a chance with a rainbow bubble tip anemone that a reefer over at R2R was giving away locally for free. Hard to turn down free sometimes. 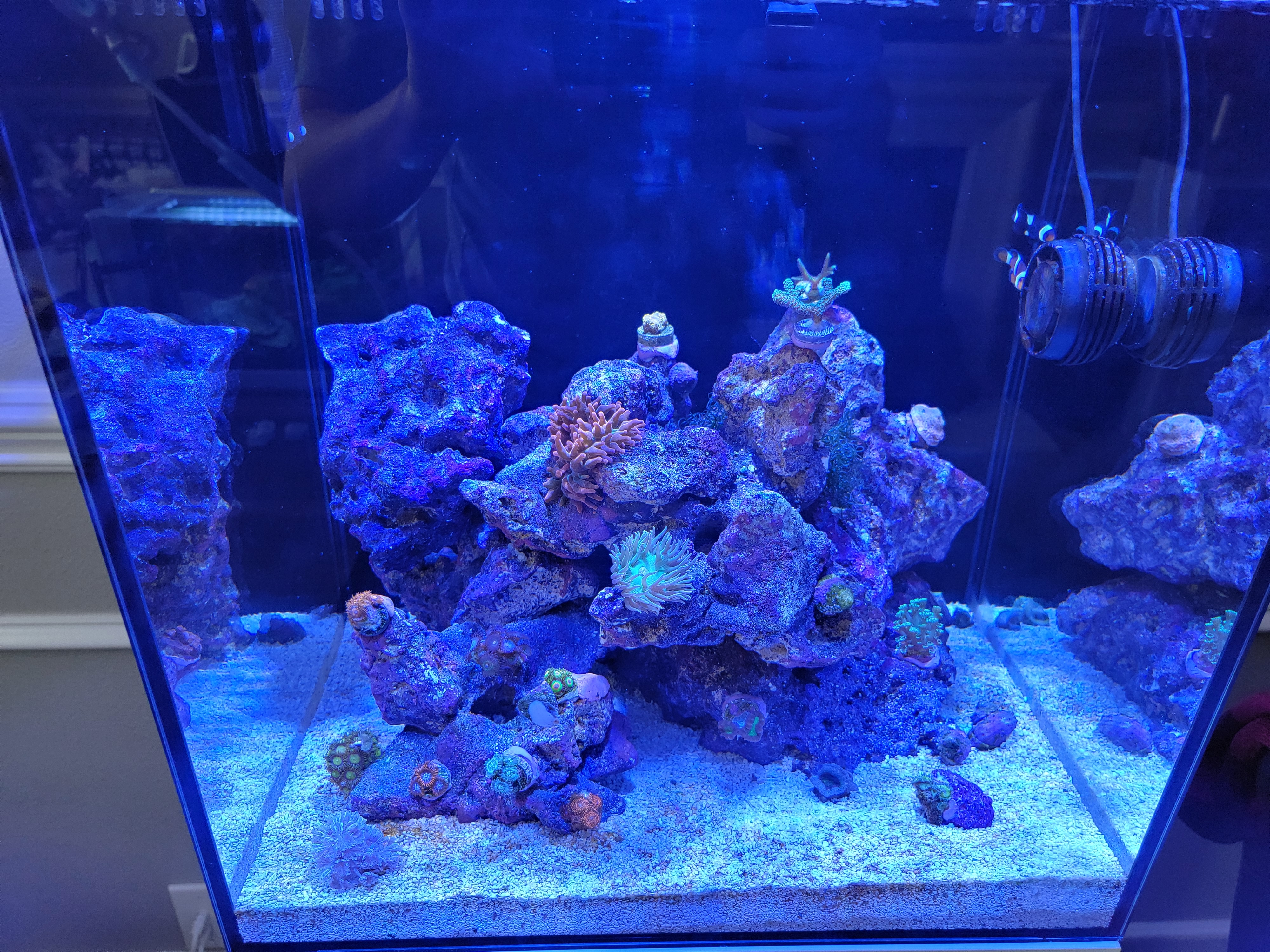 August 20, 2021
I add two new fish pre-quarantined from Dr. Reefs Quarantined Fish. An orchid dottyback and a Firefish Exquisite, each arrived incredibly healthy and have thrived to this day of writing (3/17/22.) The firefish is incredibly shy so I really only see him during feedings and when the pump is off and he thinks I'm feeding. August 24, 2021
I order a few more coral. I literally can't stop myself trying to fill up this tank, perhaps too quickly. Things are good though, the only slight struggles are with one monitpora, and I eventually kill it by doing a freshwater tip attempting to rid it of a bunch of hydroids under its growth/cap. Another stupid thing and lesson learned. I think that's about it for now, stay tuned for the next round of updates. Plenty more to share and I'll admit, things eventually turn a bit crazy.

Great writeup, and I really love your tank--clean setup and no tubes and cables protruding everywhere.

I have an exquisite from Dr. Reef ordered and on hold till I rid my office nano of a few pests (gorilla crab, eunice worms...). How has it been for you? Any aggression between the firefish and dotty or clowns? Mine will arrive alongside a tailspot blenny.

Hey wait, I know you! Didn't look at your screen name, haha. Is this the same tank that you had the splitting RBTA or another one?
D

Agree with @JojosReef nice write up and tank,
You’re off to a great start. Look forward to the updates.

Nice tank and write up.
I’ve done all those mistakes over the last 23ish maybe 24ish years. Hey it took me almost 20y to learn to quarantine, no lie!

Well if you interested I have plenty of frags I can give you. If you still need and want GSP I’ve got a lot. I also have several types of montis, caps, and digis. Shoot me a PM if your interested

JojosReef said:
Hey wait, I know you! Didn't look at your screen name, haha. Is this the same tank that you had the splitting RBTA or another one?
Click to expand...
Hah hey! This is indeed the same tank! Two splits for that RBTA so far, potentially another coming up soon if it keeps going at its ~3month cadence.

Looks good, thanks for sharing.

Sep 5 2021
First signs of cyano start to appear, only on the sand. Comes up easily during weekly water changes, I siphon it out. Aside from that, things are looking good. Sep 9, 2021
Cyano is starting to show up on the sand, especially in the lower left. Added a bunch more coral, including another torch, a lobophyllia, and two favia. Increasing coral count like they're going out of style. But my logic: should help increase biodiversity....right? Nov 14, 2021
Cyano is gone or 99% gone. I did weekly siphoning and used a turkey baster. I also started dosing phytoplankton daily. Added a few more corals, this time from my LFS.

Green hair algae has started to show itself. They're little tuffs, maybe about 10 in various spots, each about a 1/4inch to 3/4inch in diameter. I've scrubbed them off decently with a toothbrush attached to the bottom of my siphon tube, but they come back in a few days. I scrub whenever I have hands in the tank (a few times a week?) My clean up crew seem to be ignoring a few of the tank areas.

My nitrates are ~15 and my phosphates are bouncing around .00 to .1. I test every other day. I assume this is not helping my GHA. Skimmer runs 21hours a day (3hrs off in the morning after I dose pytho) and is doing amazing things for my pH, which is averaging around 8.3. CO2 media needs to be replaced every 3 weeks - if I wait longer I'll lose about .2-.3 pH. I'm trying to stay on top of it as it's not that expensive to maintain (roughly $7/mo.) Let's take a minute. Here's about where I decide acropora look amazing and I want to have them in my tank. I feel like an AI Prime 16 HD can't support acros though, so I start looking at what I can do to upgrade my lighting situation.

Dec 6, 2021
I cave to the acro/light desire and buy a G5 XR15. It looks amazing. The spread is especially fantastic. Might eventually edit this post to showcase the transition to where my tank is today, but for now I hope a few 'today' photos will suffice.

Most of my corals are doing pretty OK, but nearly all of them have GHA somehow on their skeletons. Short of cutting off the afflicted spot, it seems near impossible to get rid of once it has taken hold too. 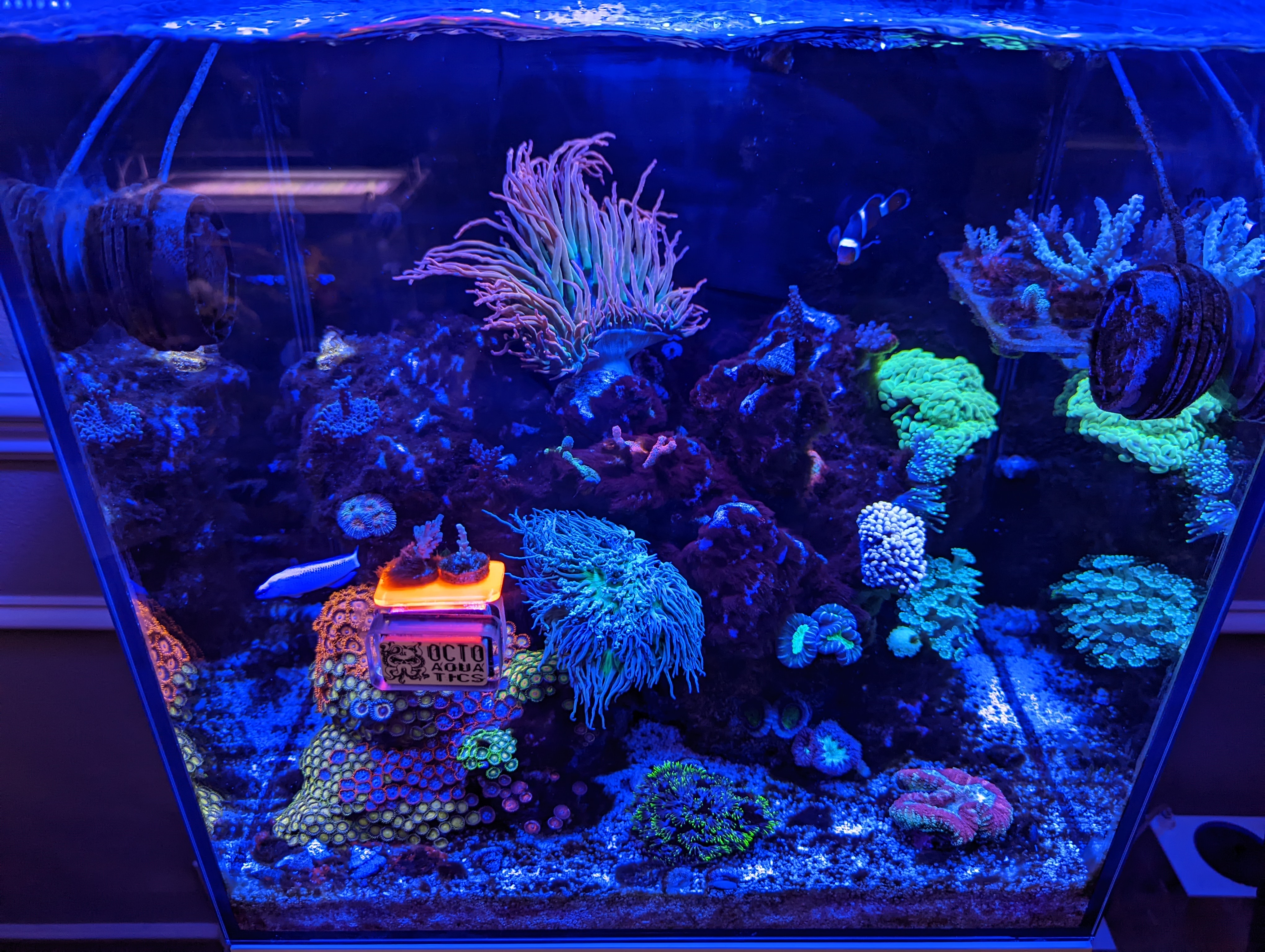 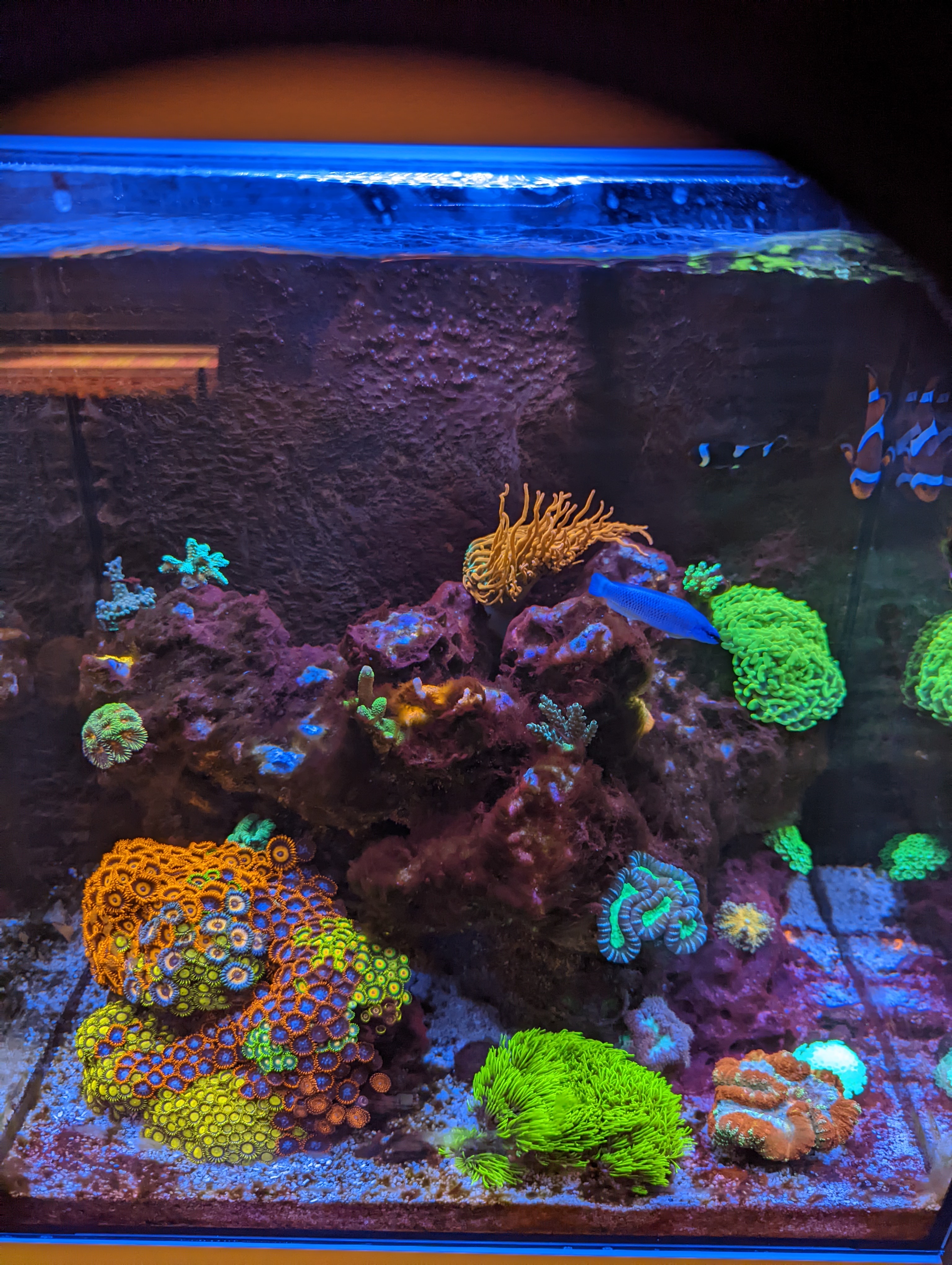 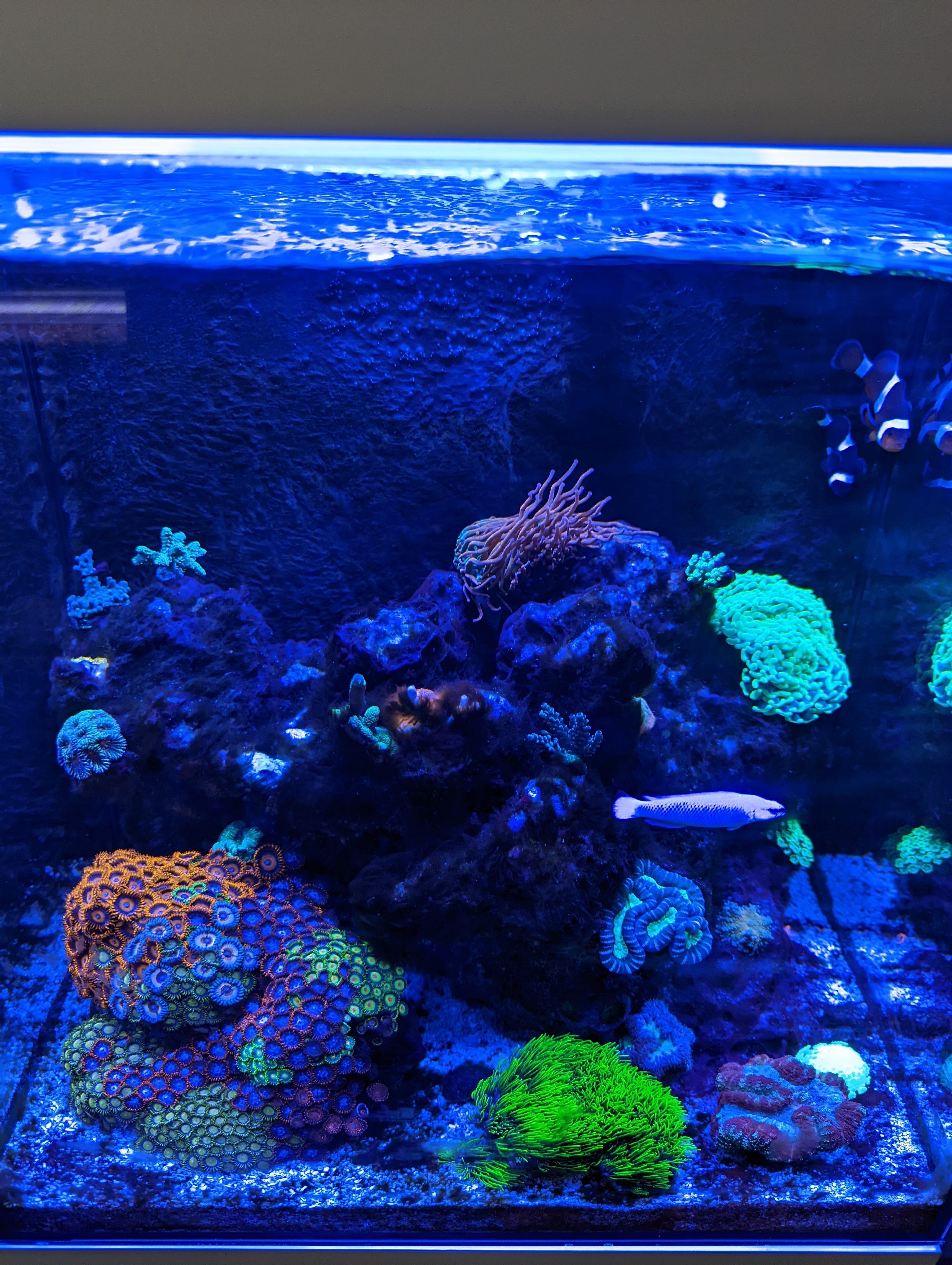 Pretty different looking under certain filters and to the naked eye.

It's obviously covered in GHA/Cyano. I THINK I'm dino free finally after 7 months of battling though. Small wins. I'm considering going nuclear with a chemiclean treatment, and then possibly even fluconazole to kill off the GHA. It's a real bad state and nothing seems to be fixing it. I'm not prepared to take out rock and scrub/scrape. That's...not fun.

Do you have any herbivores? They would really help out here. I really like this tank (I love nano tanks).

drexel said:
Do you have any herbivores? They would really help out here. I really like this tank (I love nano tanks).
Click to expand...
I have no herbivore fish unfortunately. Just not a lot of room. Only one I could maybe have fit is a lawnmower blenny, but that's really pushing it for a 22g.

Gedxin said:
I have no herbivore fish unfortunately. Just not a lot of room. Only one I could maybe have fit is a lawnmower blenny, but that's really pushing it for a 22g.

My CUC mostly perished during the many month dino phase. Today i've got a few margarita snails, 6 hermits, 1 pincushion urchin, 5 bumblebees, and 5 nassarius. Previously adding more snails just resulted in mass deaths.
Click to expand...
I was referring to mainly snails/inverts as herbivores and not fish. A lawnmower in that tank would wreak havoc in no time at all. I would suggest (when you're ready to add more) adding one tuxedo urchin (small), a turbo or two and astraea snails. You could add a small Tonga fighting conch for the sand too? The CUC you have now are not really designed to take care of algae. I usually don't recommend hermits for nano tanks, but if you want a hermit or two, then stick to scarlets, as they are less murderous than the others. People often think they have a nutrient problem when it comes to algae, but in reality, you have a herbivore problem. I've never witnessed or experienced solving algae problems with nutrients (up or down), it just doesn't work that way. Good luck and keep us posted! Happy reefing!
You must log in or register to reply here.
Share: Facebook Twitter Google+ Reddit Pinterest Tumblr WhatsApp Email Link