some input on water params ty

Running a nyos 220 and a refuge with reverse lighting with some red ogo. ogo is growing and skimmer is bringing out gunk.

my question is does this look ok? im a little concerned about alk being low but theres also nothing in the tank, should i start dosing to increase or leave it till i have more stuff inside the tank?
thanks, any help is apricated

Pics of tank, what are. Your goals? What other equipment do you have,..... 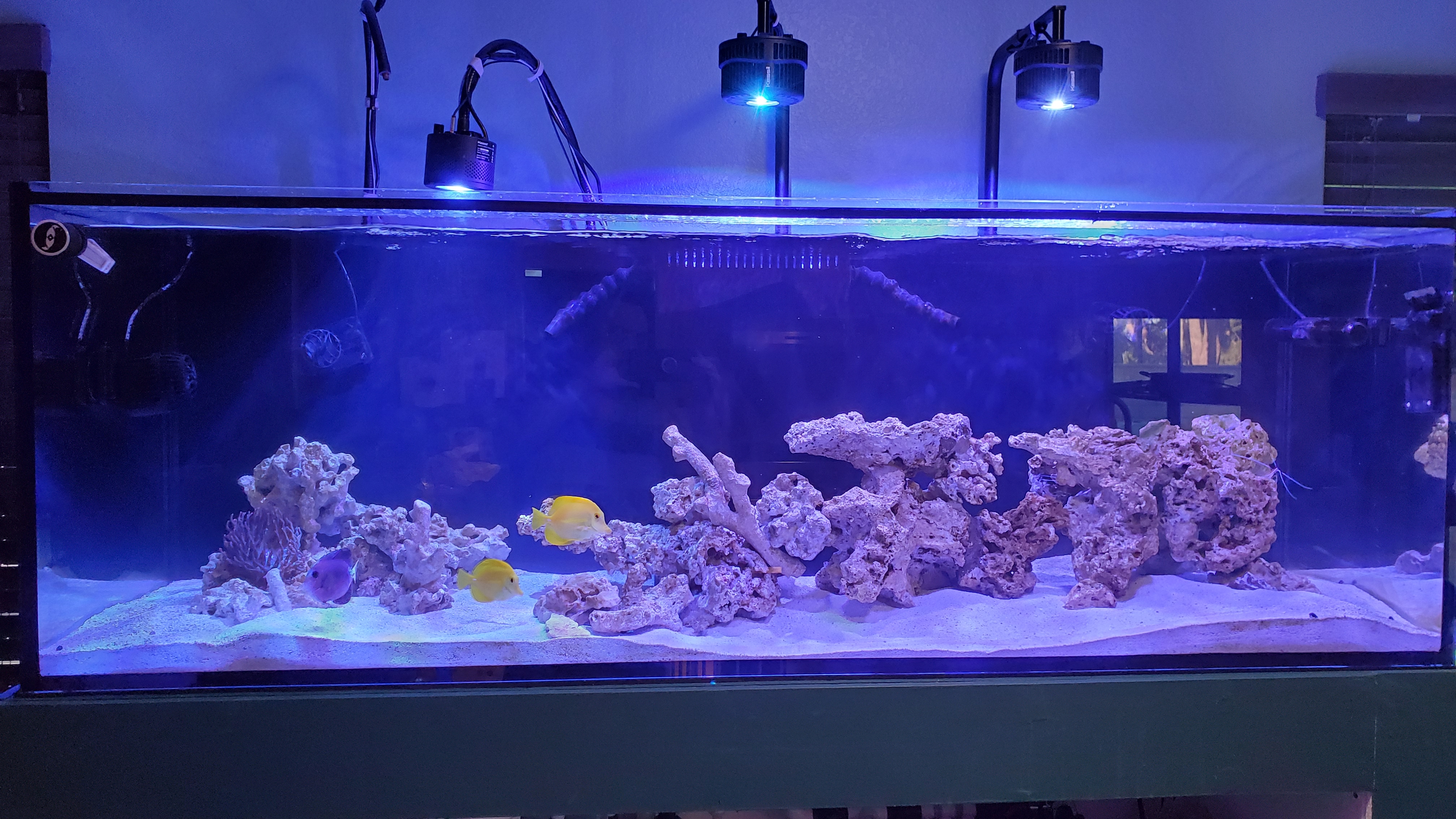 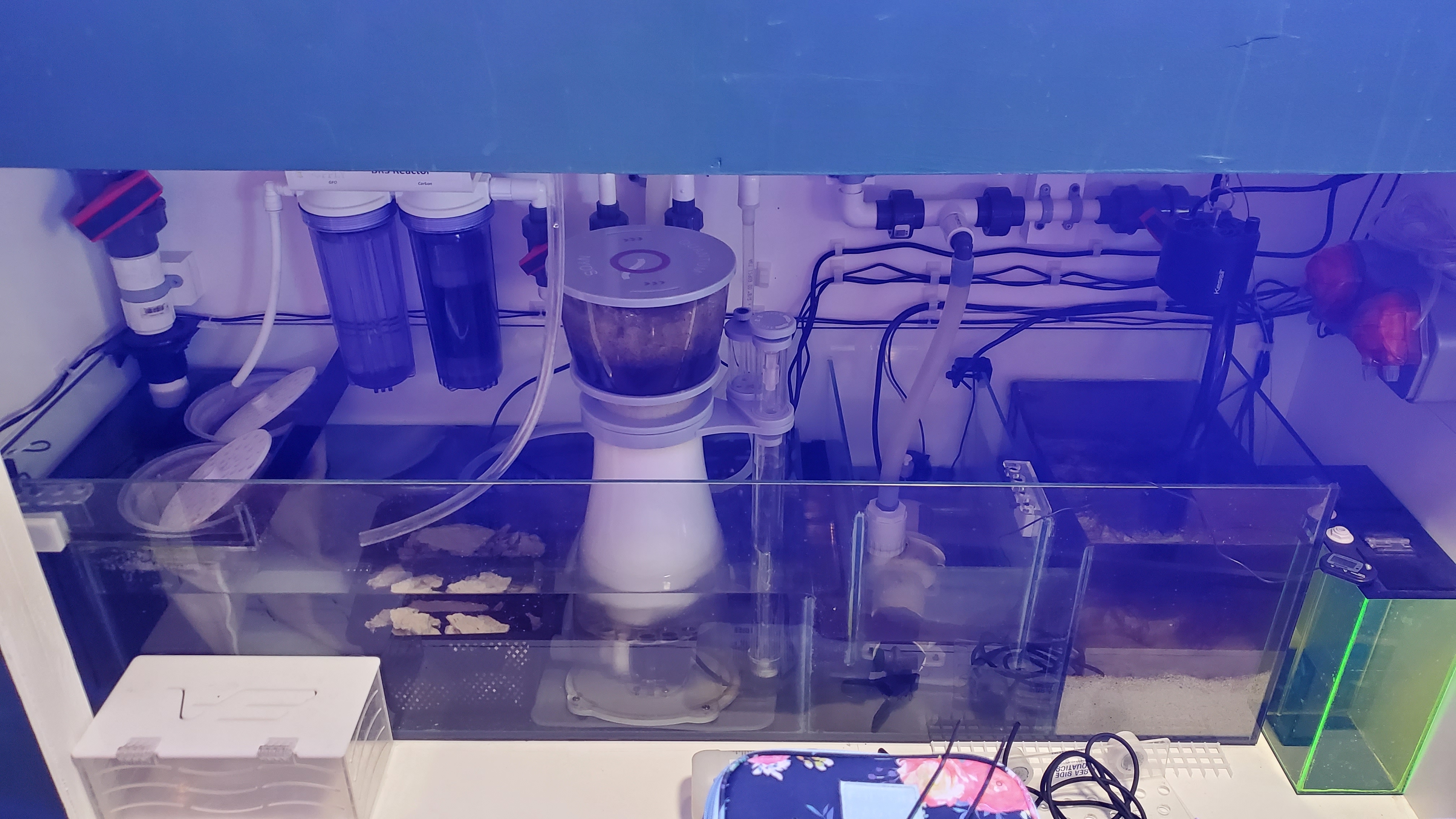 The goal is a mixed reef leaning more on the lps side. I like acros but the wife likes lps/softies and since she's paying and I still want sex...

Drop phosphate and you should be good to go

Thanks for the input, I'll add some gfo. That came Friday I totally forgot to add it.

I would slowly drop po4. Try like 1/2 cup gfo to start and see how it goes.

the first time I used gfo I over did it. Stripped all po4 over night which I believed caused dinos. I still use gfo, but after that I figured too little is better then too much- so I would start slow on the gfo.

otherwise looks like a beautiful set up! Can’t wait to see it full or coral lol

BgFish said:
I would slowly drop po4. Try like 1/2 cup gfo to start and see how it goes.

the first time I used gfo I over did it. Stripped all po4 over night which I believed caused dinos. I still use gfo, but after that I figured too little is better then too much- so I would start slow on the gfo.

otherwise looks like a beautiful set up! Can’t wait to see it full or coral lol
Click to expand...
The BRS calc is saying 1.5cups for my size, but im gonna do what you say. ease it in slowly and let it drop over time.

if you’re dosing ca and mag, you can pause for a while.

I'm not dosing anything right now. Tanks like a month after cycle. The ugly stage just left. That was basically the question. Since the tank has nothing, I start dosing? Or like give it a few weeks and see what happens? I did add 1/2 cup of high capacity brd gfo

Ill give it another week on the 0.5 cups gfo and increase to 1 cup
I'm concerned about the alk. Do I need to start dosing alk now. I have fish and 1 anemone or best to keep at a higher level so when I do add corals the water is at a optimum? I do 5g waters changes every other day

Any help is appreciated thank you.

natural saltwater level for alk is 7-8. there’s no need to worry about ca, alk, mag right now. Not until there are a number of corals actually growing in the tank. you can keep slowly working on the phosphate. this is a slow hobby, nothing good comes from rushing stuff and making lots of changes. take it easy. don’t worry be happy! 😁

as things stand i can probably wait till black friday to see if theres gonna be better sales for 2-part.
thanks for the help~

Great job getting the alk up! Almost there, the Phos still a touch high, but I've had success with phos near those levels as long as nitrates are 5-10ppm.

The recommended gfo needed for my tank is 1.5 cups, Im just adding that amount slowly so they dont fall too quick. generally i test once a week and mag once a month, but when im adding something new, like gfo ill test every 3 days and monitor it. I added 1 cup this sunday so hopefully end of the week i'll be close to 0.1 before adding the last 0.5 cup.

nitrates i really want lower but again i really dont want to add too many things..yet.. i have a refuge with some red ogo growing and a nyos 220 so i kinda wanna give the refuge some time to mature and hopefully that with the skimmer can bring it down. ive got like 600g worth of salt so if shit really does hit the fan then im willing to do massive water changes to bring it down. i dont even know how long should it take to mature. something to research. a friend said bio pellets have worked for him so i can look that up and set some cash aside for that if i really need too

everything else im just playing it by the ear. My first tank i didnt start testing till maybe 7-8 months in so i really have no baseline to work off > < hopefully everything will work out without too much trouble
You must log in or register to reply here.
Share: Facebook Twitter Google+ Reddit Pinterest Tumblr WhatsApp Email Link