The next step is figuring out the flow in the tank and was one of the trickier elements of the build. On one hand, I want to keep that “clean look” with little or no wires visibly coming out of the tank, and on the other hand, I want to keep quite a bit of SPS and need to provide significant amounts and varied flow in a rather wide rectangle-shaped footprint. Seemingly two goals that conflict – a ton of unnoticeable flow. So, for most of my flow, I went with the most unnoticeable pumps currently on the market (or at least the only ones that don’t have cords running around inside the tank and should pretty much disappear against the black background). 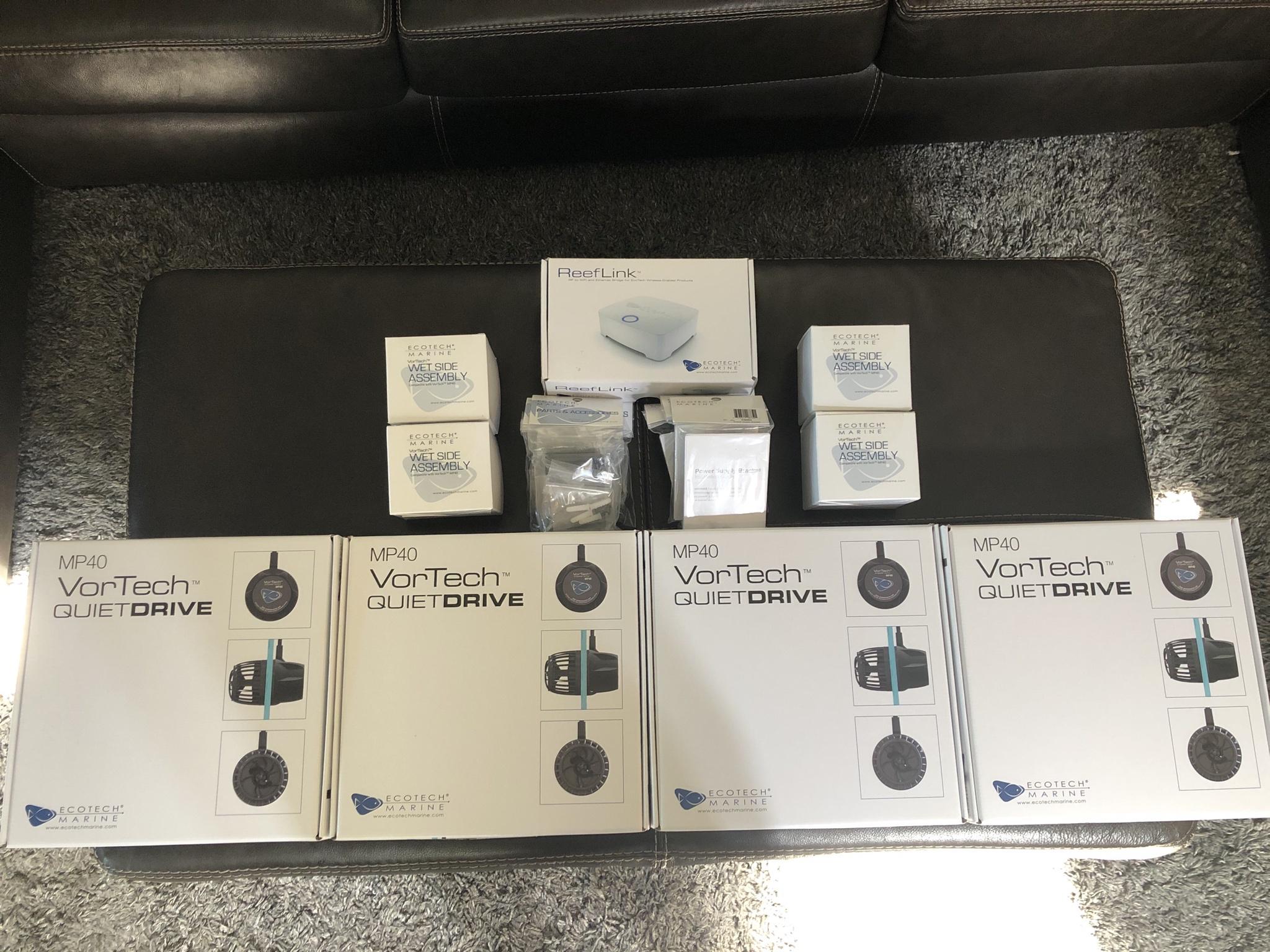 The problem with the Vortechs is that they can only be placed on the back wall of the tank, but with an internal overflow taking up part of the back wall, I am guessing that there would be quite a few dead spots in the middle (especially once SPS start to grow in at the top of the tank). That’s why I decided to place a gyre pump at the top of the overflow box so that the cord is not extremely noticeable, and should create enough flow in the center of the tank to address most of the dead spots. 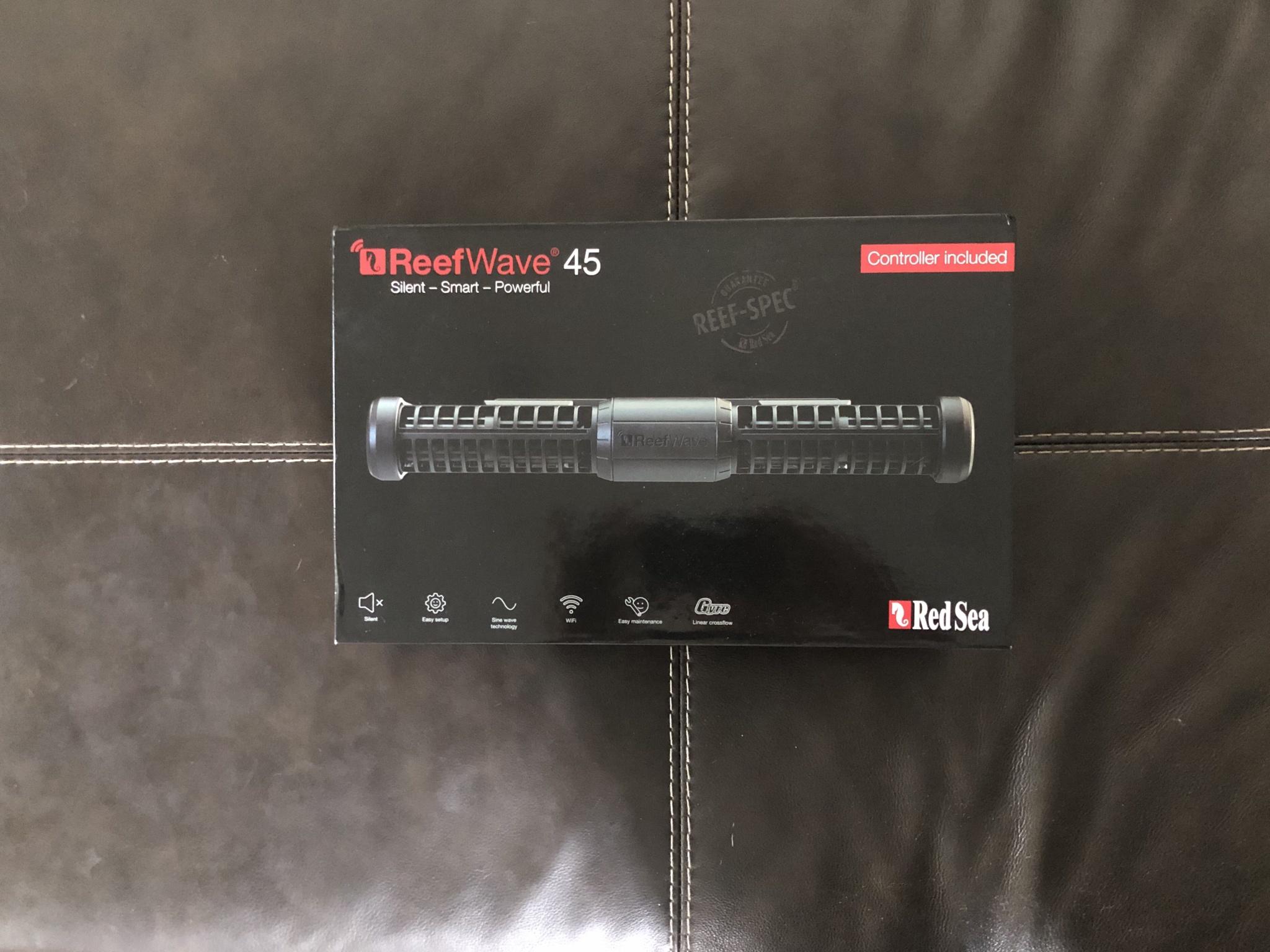 I also went with some flow accelerators on my return line, so that I can direct the return flow into the rockwork to eliminate as many deadspots as possible.

While I don’t expect that it will come to this, depending on how my current set-up works, I might add two different types of pumps down the line: 1) Another gyre pump on the far end of the tank (not preferable because it is a viewing panel) and/or a directional pump on the back wall to flush out any dead spots in the rockwork (also not preferable since it will result in a not-so-easy-to-conceal cord running up the backside of the tank):

REPOWER said:
Excellent flow strategy. Saved...in case I upgrade to a smaller scale peninsula.
Click to expand...
Yeah, so far so good. I like it because, for now, all of the pumps will be on pretty low, but as the need arises (i.e., when I start getting some corals and/or they start growing out), I'll just bump it up and keep doing that without maxing out any one particular pump.

While I live only about 15-20 minutes from the beach, it still gets pretty hot where I live at times (hitting 100+ degrees just a few weeks ago) and will dip as low as the high 30’s a few nights during the winter. So, just in case, I wanted to make sure my tank would be taken care of regardless of the weather.

Heating: I will be running two 600-watt BRS Titanium Heaters with their own controllers. Since they independently should be able to handle my tank, one will be the main heater, set to turn on at a temperature of approximately 76 and off at a temperature of approximately 77, and the other heater will purely be used as a back-up, and set to turn on at 75 and off at 76. Both will be plugged into the APEX which will have ultimate control and shut off both if the tank reaches 78. 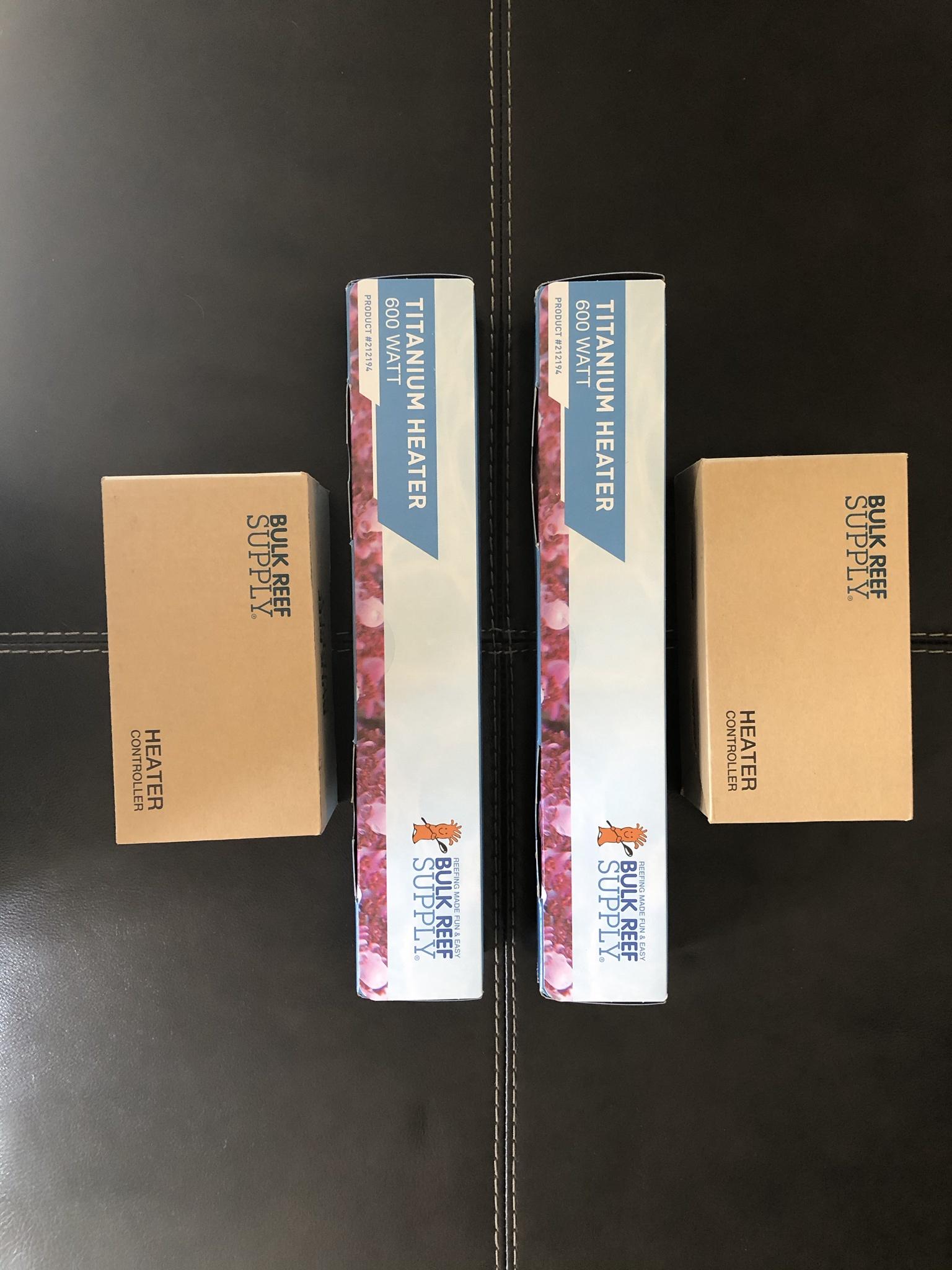 Cooling: This is obviously more of a concern for me, but I think that without a canopy and not running Metal Halides, I should be in pretty good shape. In fact, even when it was over 100 degrees a few weeks ago, the tank was still just hovering around 78 degrees without any additional cooling (aside from our A/C). Just in case the $h!t hits the fan though and my A/C breaks in the middle of a heat wave or something, I wanted a back-up plan, so I'll also run with the following equipment. 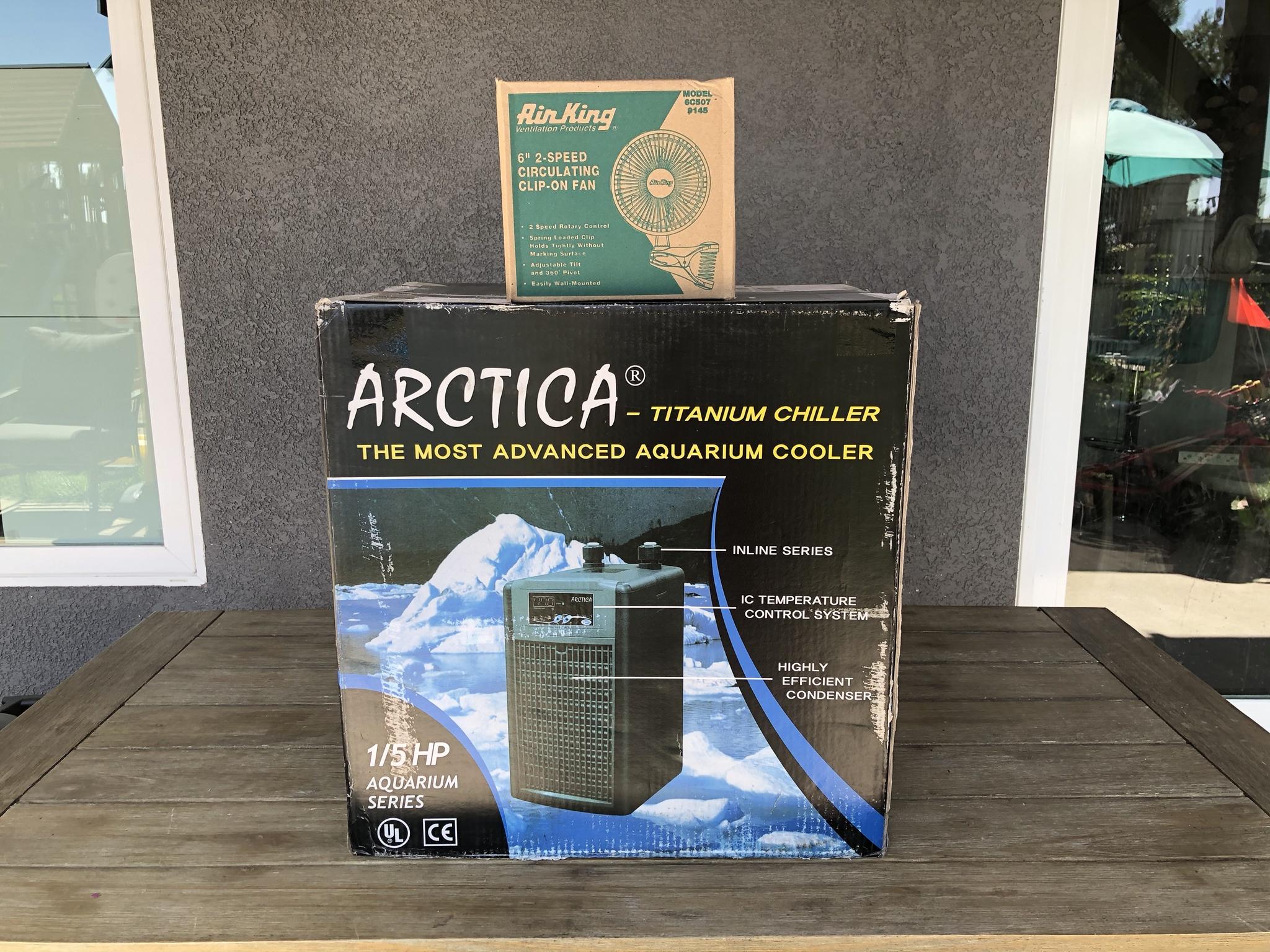 This was another tough decision… back in the day, I ran with Metal Halide and supplemented with T-5’s, but with energy costs the way they are going in Southern California (I live in one of the more expensive areas for energy in the country with SDG&E as my utility provider) and the controllability you have with LED’s, it seemed like it made too much sense NOT to go with some form of LED lighting option.

So, then it became a decision of whether I wanted to go with only LED or a hybrid option of LED and T-5. I did quite a bit of research on this, and it seems like the safest bet on making sure you have enough coverage/spread on such a wide tank without shadowing after the SPS frags have grown into SPS colonies is either a car downpayment’s worth of LED’s or a hybrid of LED’s and T-5. I took the more cost effective approach here and decided to go with the hybrid option.

LED Option: When first trying to make this decision, I narrowed my options to either the Ecotech Radions G4 XR30 Pro (the G5’s weren’t out when I was considering this) or Kessil A360X. Honestly, I was kind of leaning towards the Kessils until the Ecotech Radion G4 sale popped up and I couldn’t pass up the deal. So, I scooped up 2 XR30 Pro units to pair with the 4-bulb hybrid T-5 fixture.

T-5 Hybrid Fixture: The choice here was mostly about aesthetics since I planned to simply mount the fixture above the tank without a canopy. Initially, I was looking at the Geisemann Stellar fixture since the fixture I chose NEEDED to only have the power cord(s) come out of one end (since this is a peninsula style) and the standard Aquatic Life hybrid fixtures have the power cords coming out of both ends (although you can turn one around). But then I came across a deal for the Dimmable Aquatic Life T-5 fixture and went with that one. Only one power cord coming from one end AND looks a bit sleeker than the other hybrid fixtures I was looking at. 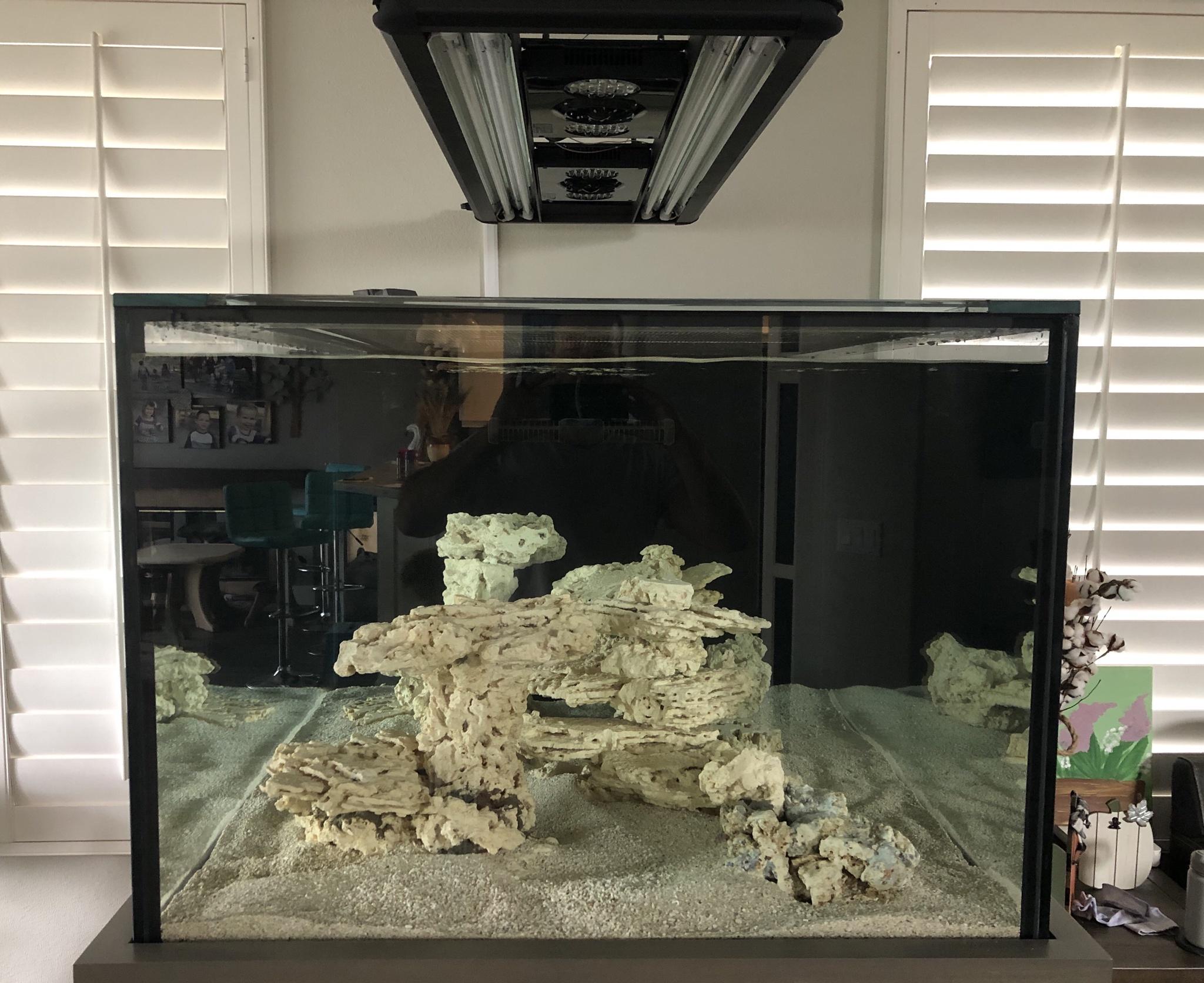 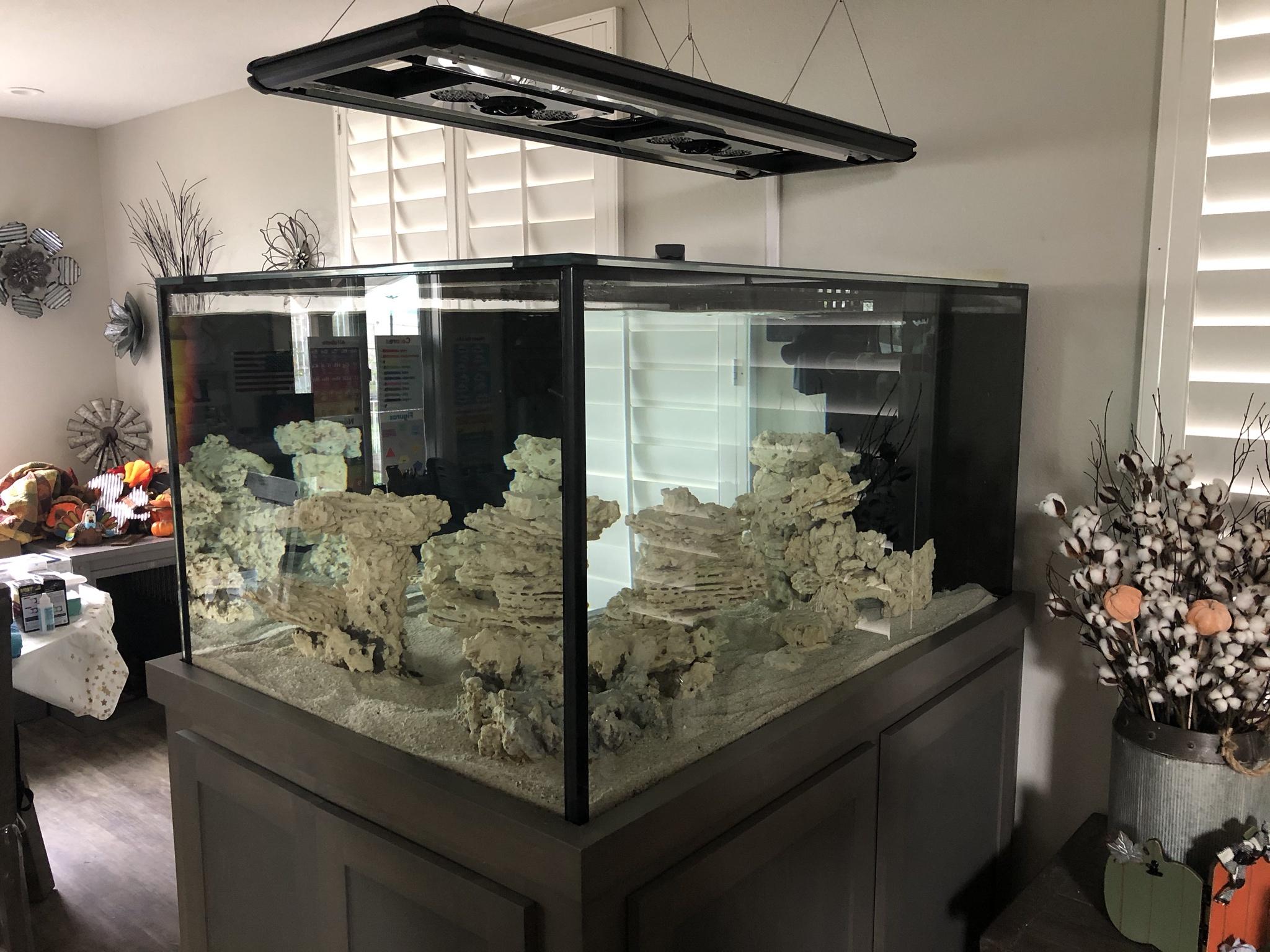 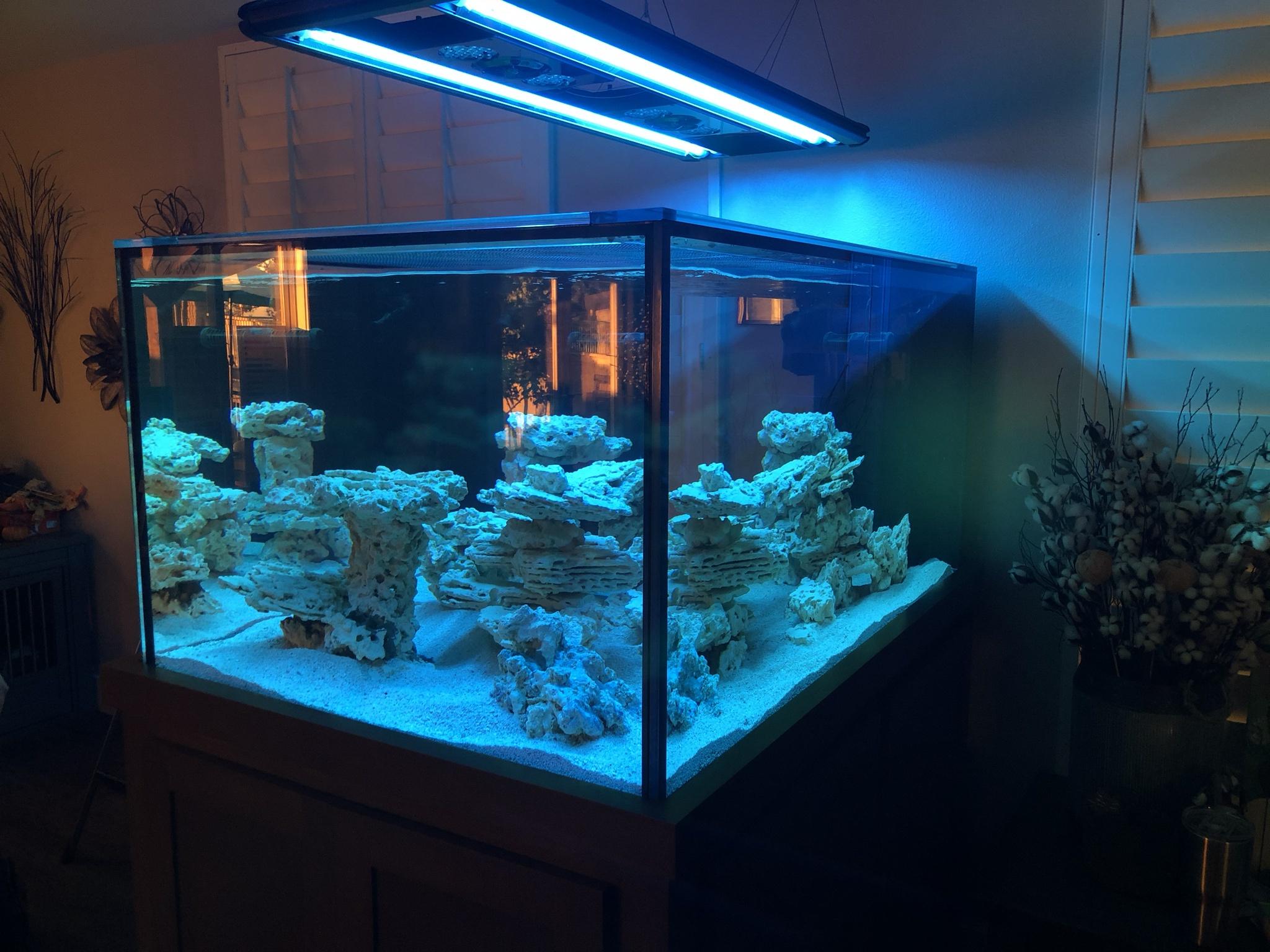 Depending on the PAR readings I get on the current set-up, I might have to expand the spread of the unit and/or add some more power.

Curious why you say that the vortechs can only be placed on the back wall. Preference?

BeanMachine said:
Curious why you say that the vortechs can only be placed on the back wall. Preference?

Yup, that's exactly it (preference and look). Since it's a peninsula tank, I'm trying extremely hard to avoid placing any equipment/pumps on the viewing panes of the tank, so the back wall is my only option here.

So now that I have the core components for running a tank in place, I was able to get the cycle started with Brightwell’s products. The ammonia went down to from about 3ppm to zero in just a matter of days, but the dang Nitrite has been over 1ppm for several days now. Just waiting for that to go down to zero before introducing my first few fish. 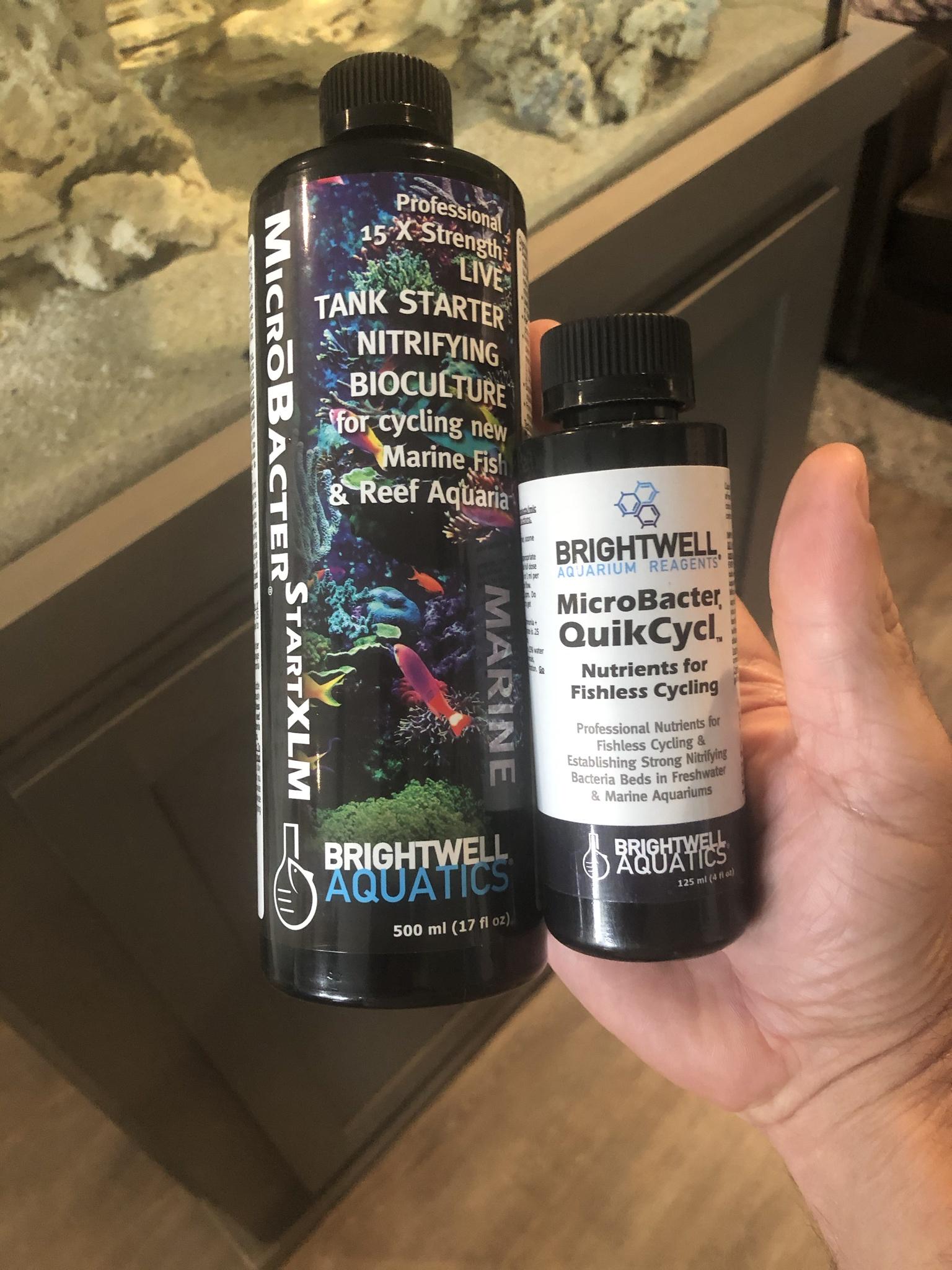 Speaking of fish… they’re officially out of quarantine and just waiting for their new home.

For this first round of fish, I wasn’t expecting to get a Blue-spotted jawfish so early, but found one for a really good deal, and then brought home what my kids call the “pretty fish” (i.e., Royal Gramma) that my kids LOVE already, and two Bangaii Cardinalfish to add a different shape/color/pattern (not sure if they’ll pair up but I’m crossing my fingers). 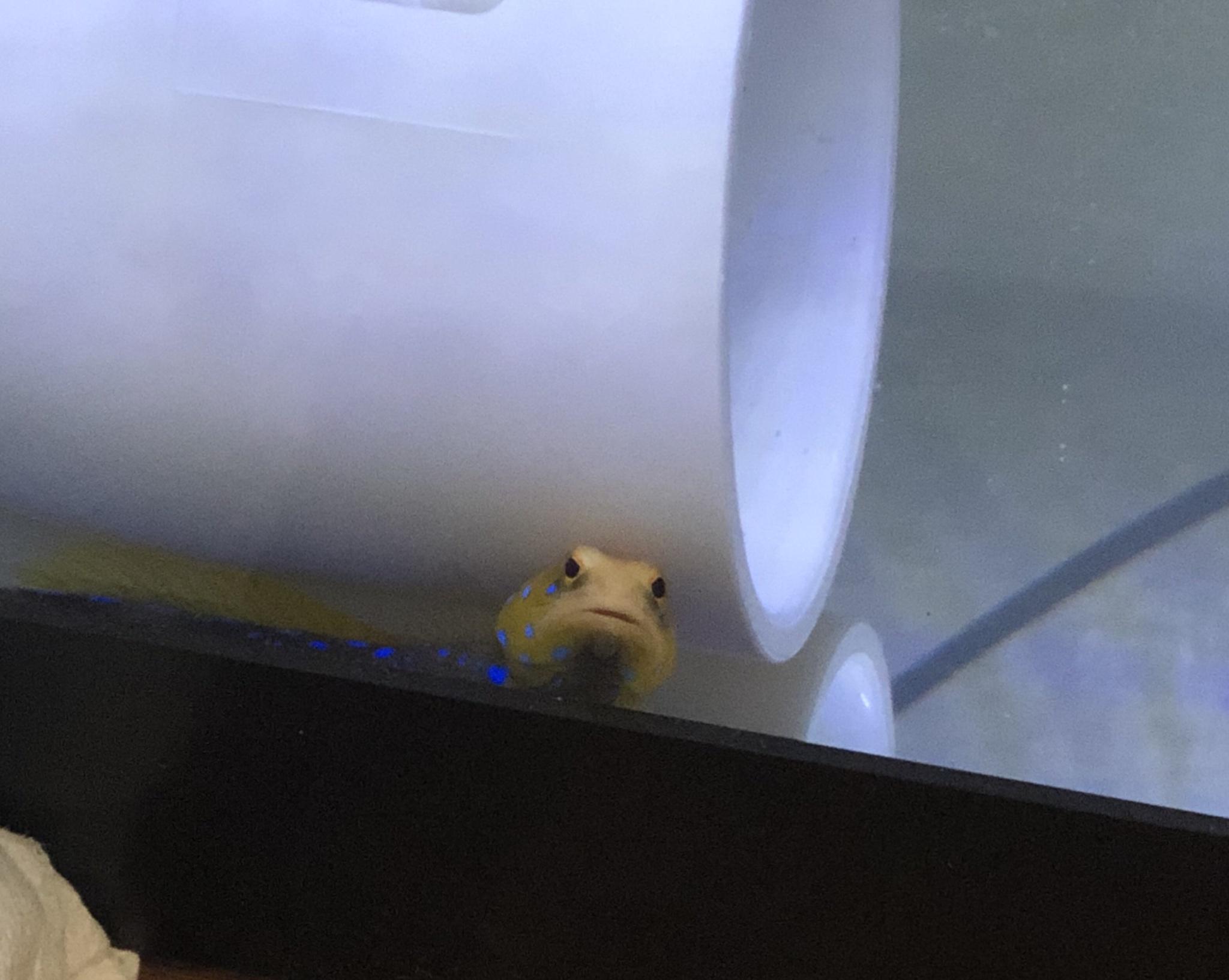 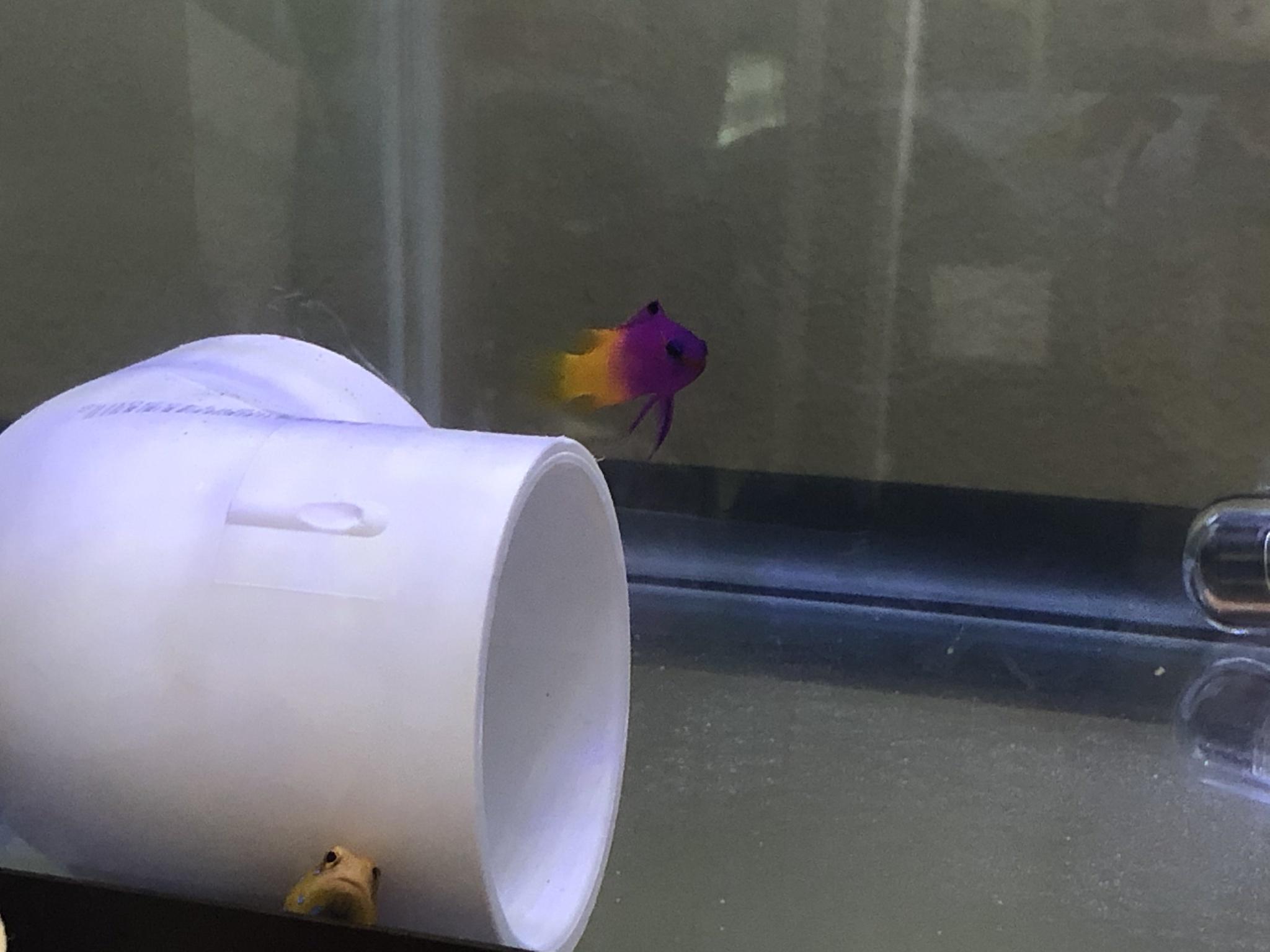 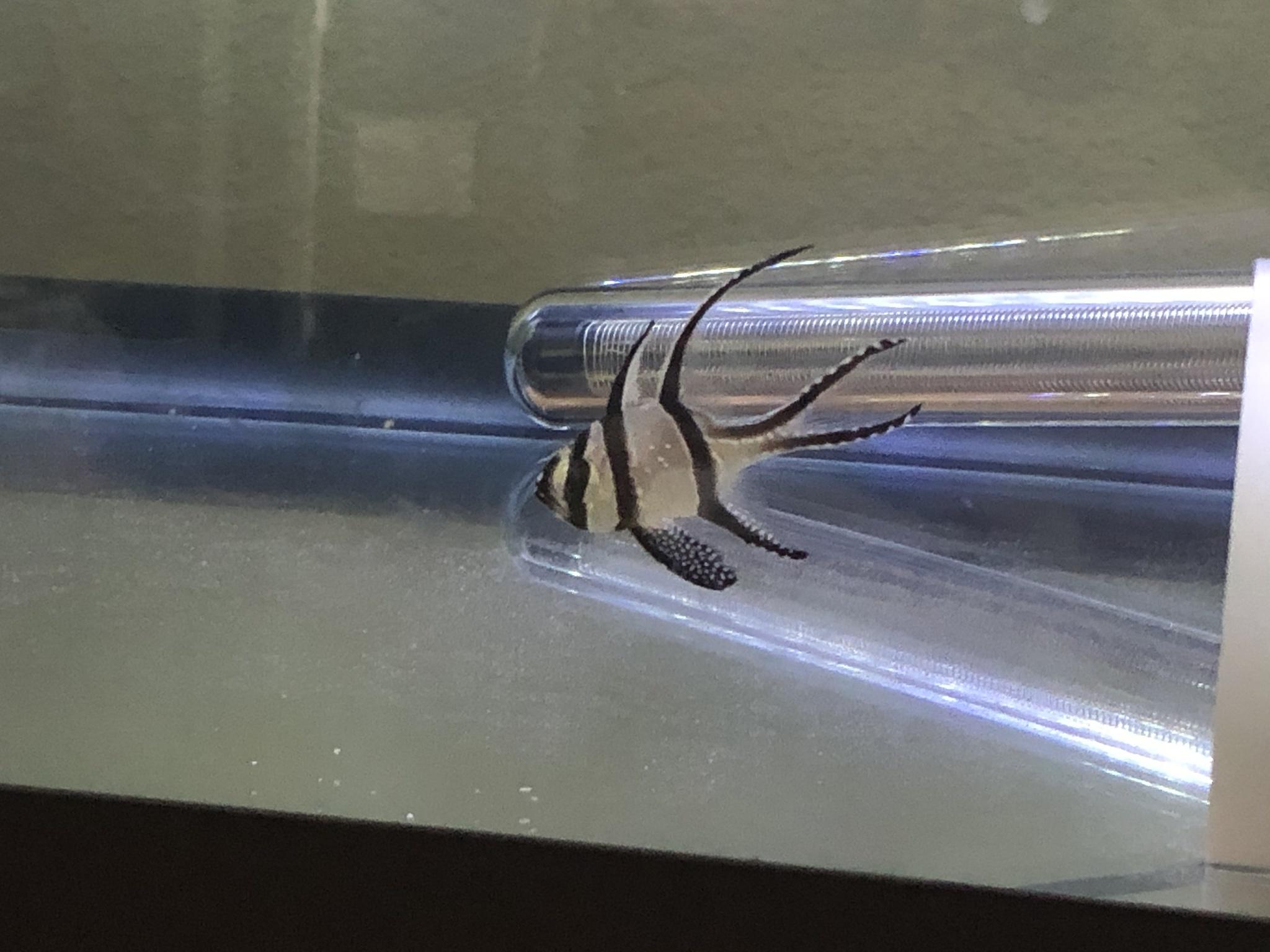 Something I have done in the past with success is quarantine my own fish. Except this time around, I’ve looked to the expert on this (Humblefish) and essentially copied the process from him. It might sound complicated if you haven't done it before, but after you go through one round of this treatment plan, you’ll soon realize it isn’t that bad.

While I'm on the topic of quarantine, I'm not stopping at my fish. The biggest pain the ass is having to treat parasites after they're in your DT, so I'm trying my hardest to simply never get any parasites in my DT to begin with.

Plus, with my sump outside, I need to put something in my stand that can double as a QT and a Frag tank in the future.

The plan is to quarantine everything for about 45 days so as to avoid not only coral pests, but also fish pests that may hitchhike onto the corals/inverts. 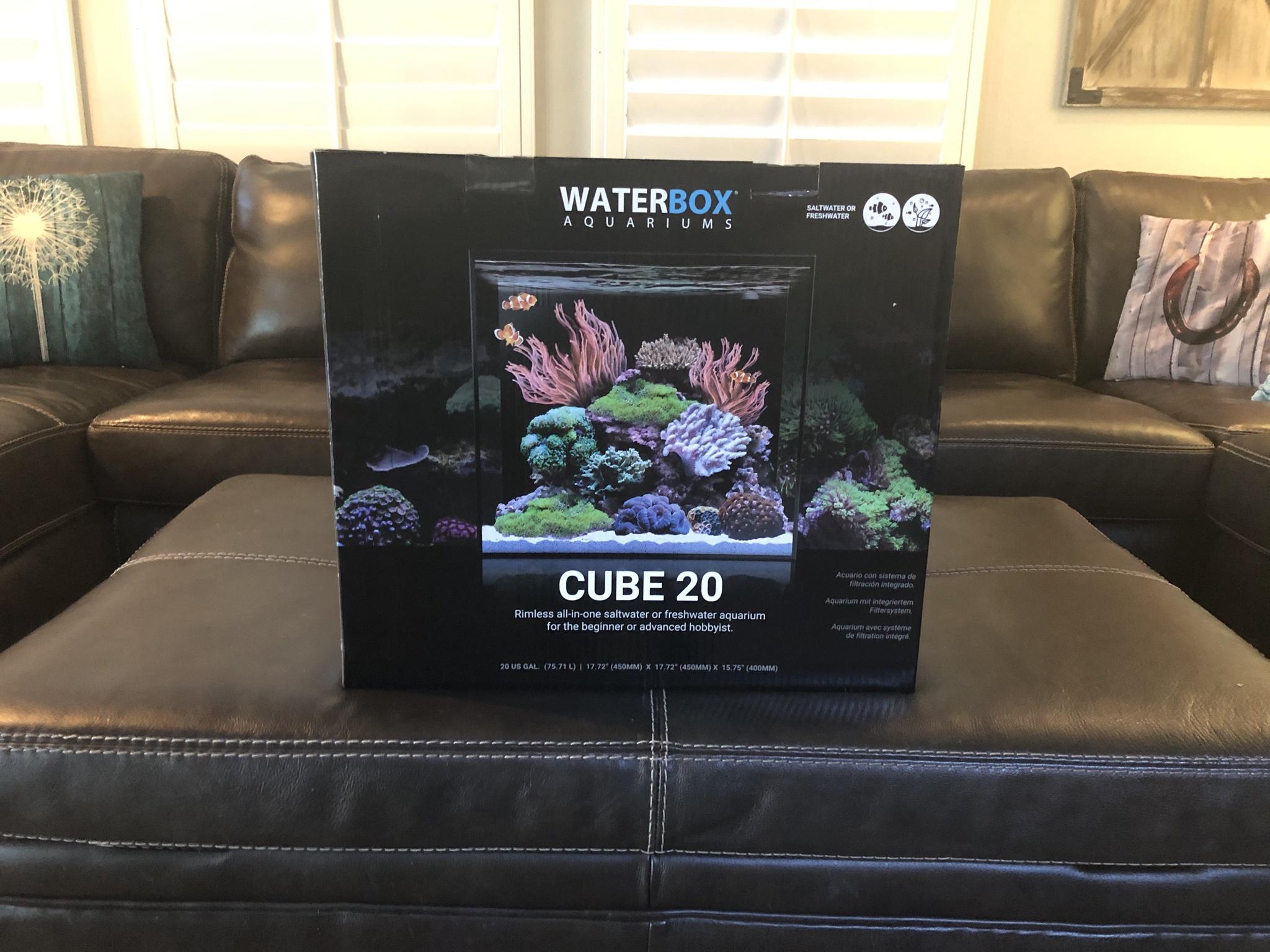 And since I plan on keeping an SPS-dominant mixed reef in the DT, I made sure my QT had enough light... 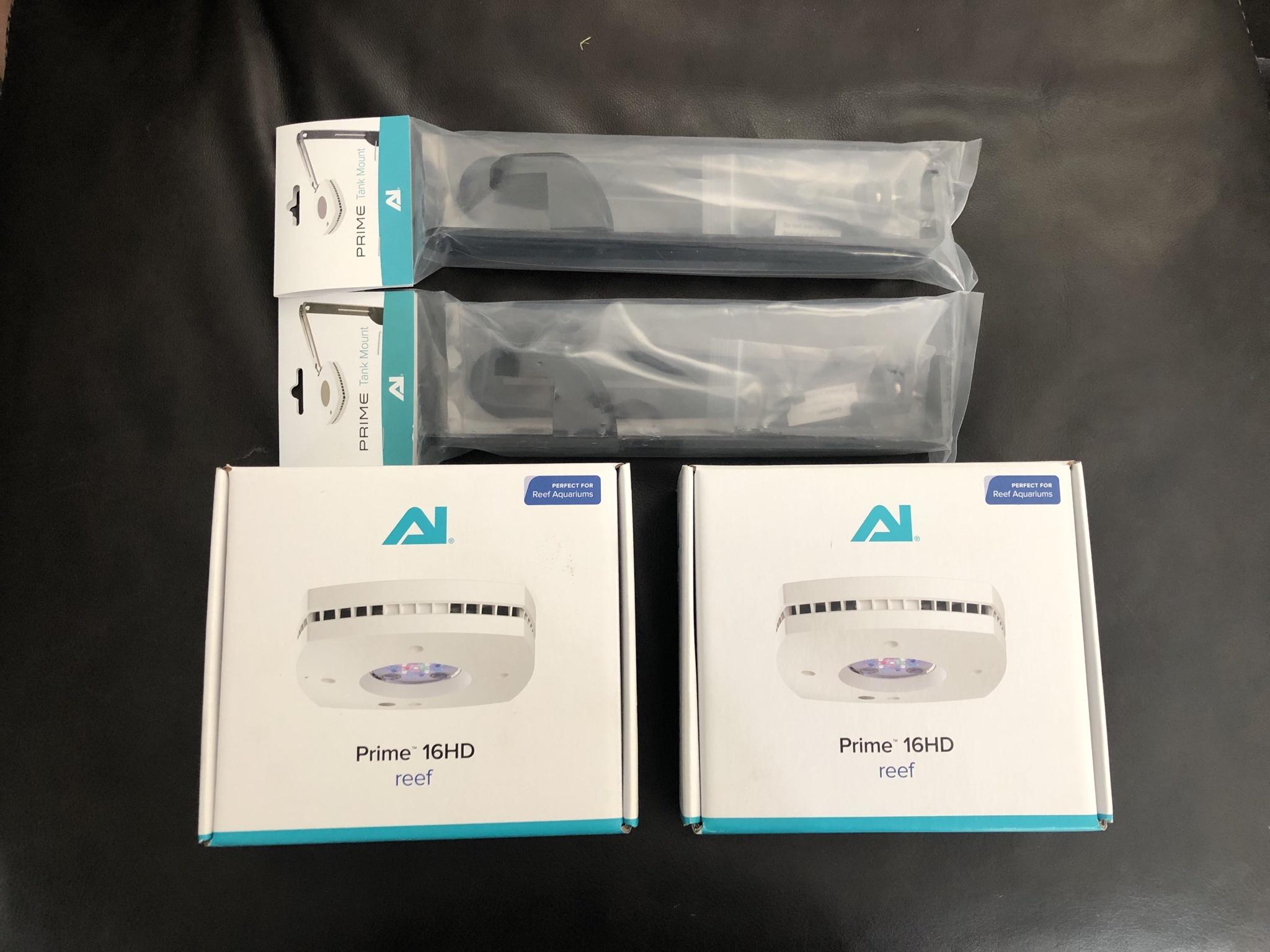 This is like a clinic in how to set up a new reef tank. And also an huge budget.

Who made your tank net cover to stop the fish from jumping out?

Jimbo327 said:
This is like a clinic in how to set up a new reef tank. And also an huge budget.

Who made your tank net cover to stop the fish from jumping out?
Click to expand...
Hahaha... thanks!

I made the QT cover out of egg crate and window screen.

For the DT, I used the D-D Jumpguard Pro. It looks really nice and fits right on the inside rim of the tank so it pretty much disappears. 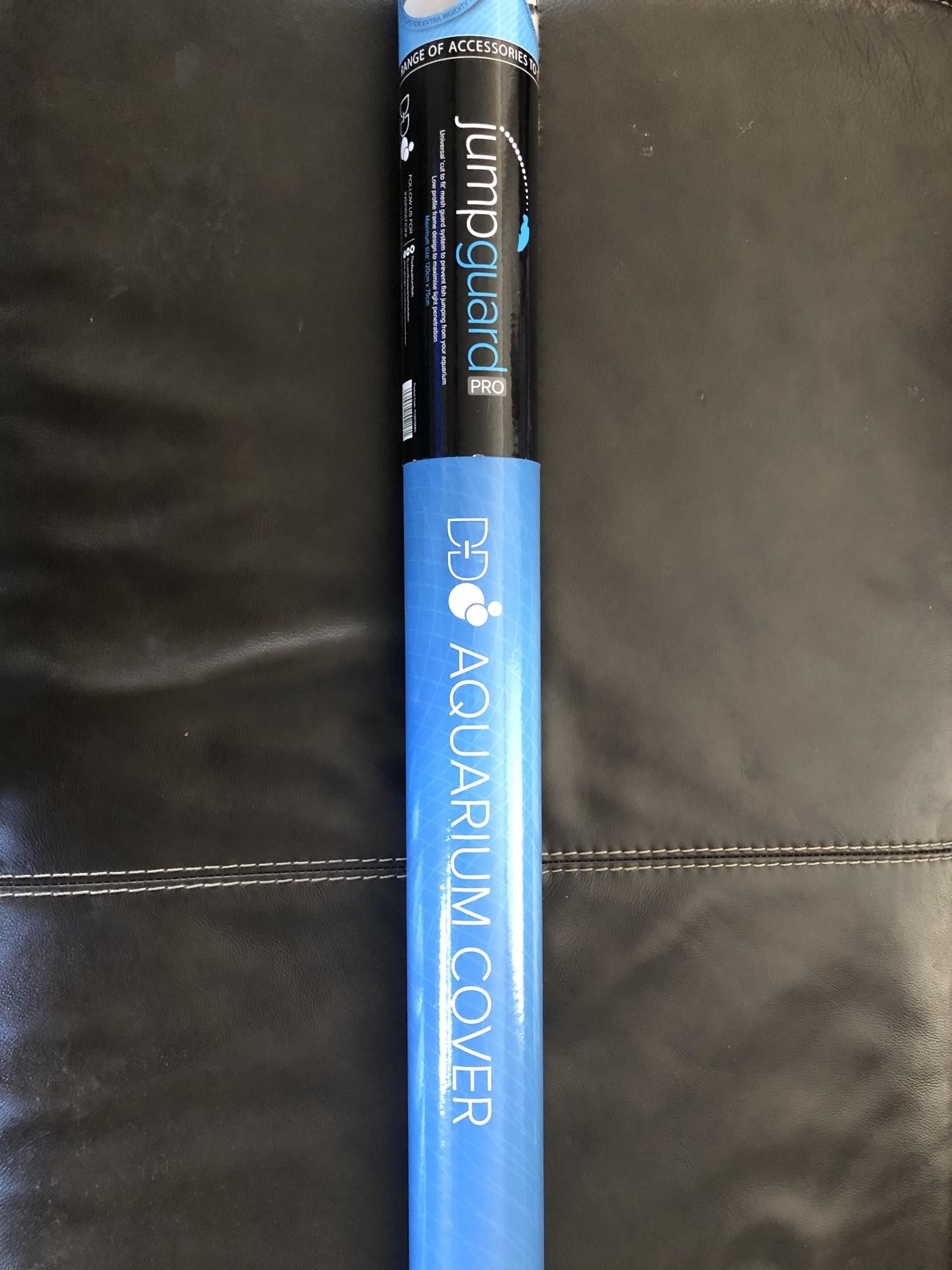 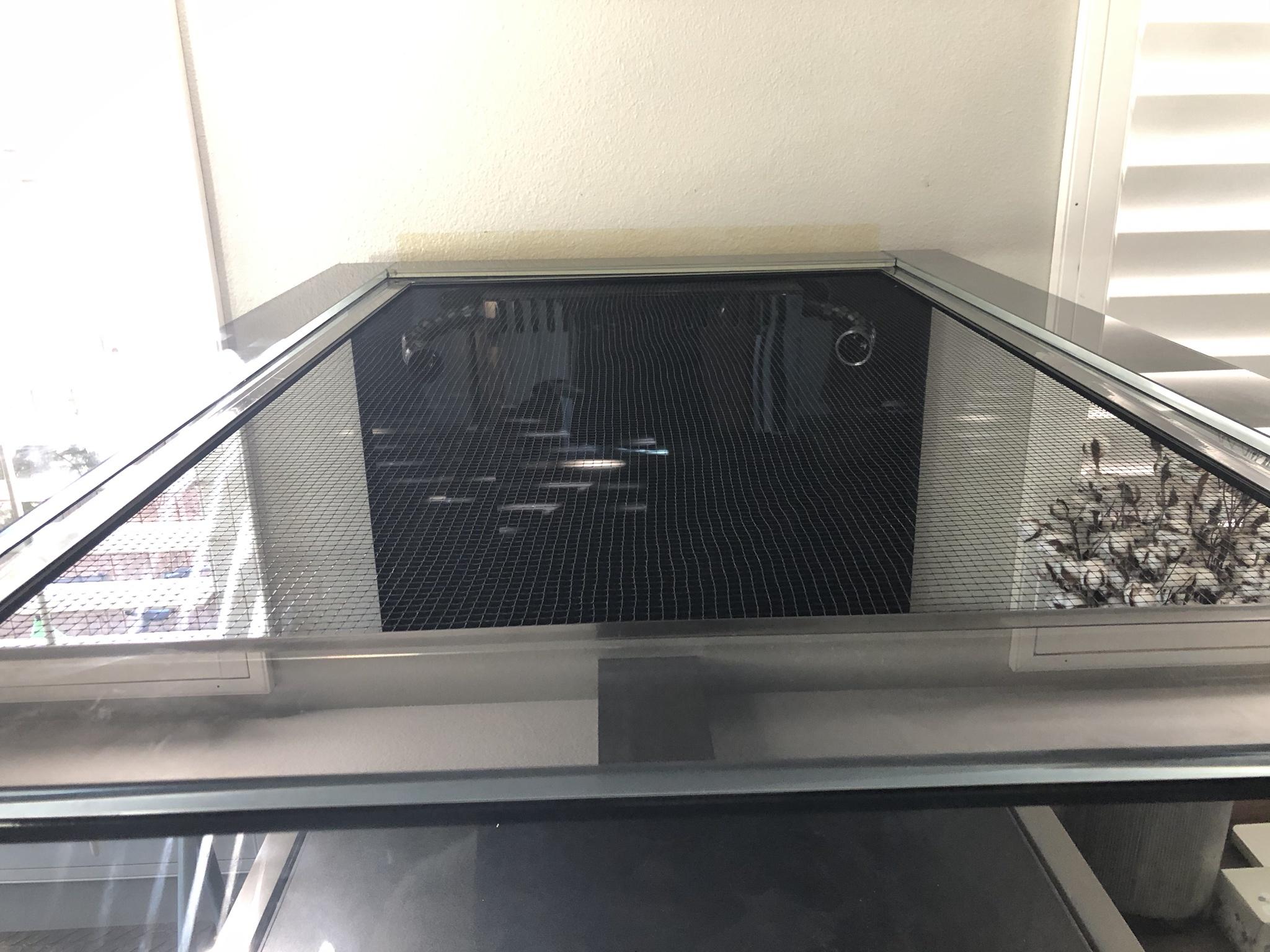 Man such inspiration for me keep up with post and updates!!!

djrice69 said:
Man such inspiration for me keep up with post and updates!!!
Click to expand...
Thanks!


Sent from my iPhone using Tapatalk Pro
Click to expand...
Thanks! Yeah, I’m hoping the cycle completes this weekend so I can start adding the first round of fish.
D

Amazing setup and great read. Thanks for the detailed documentation.

Drftsld said:
Amazing setup and great read. Thanks for the detailed documentation.
Click to expand...
Thanks! I'm working on some updates, but this next one is kind of a long process (for me), so it is taking a while.

It seemed like it took forever (although, it only took about 3 weeks if I recall correctly), but my cycle finally finished up (Ammonia and Nitrites at zero), I did a 25%+ water change and added the first batch of fish this week. I’m sure they were as ready as I was to get them out of my post-quarantine holding tank. The little Blue Spotted Jawfish has already made himself a little home in the very front of the tank, so we’ll see if it stays put (I’ve read they will sometimes move around their burrow). 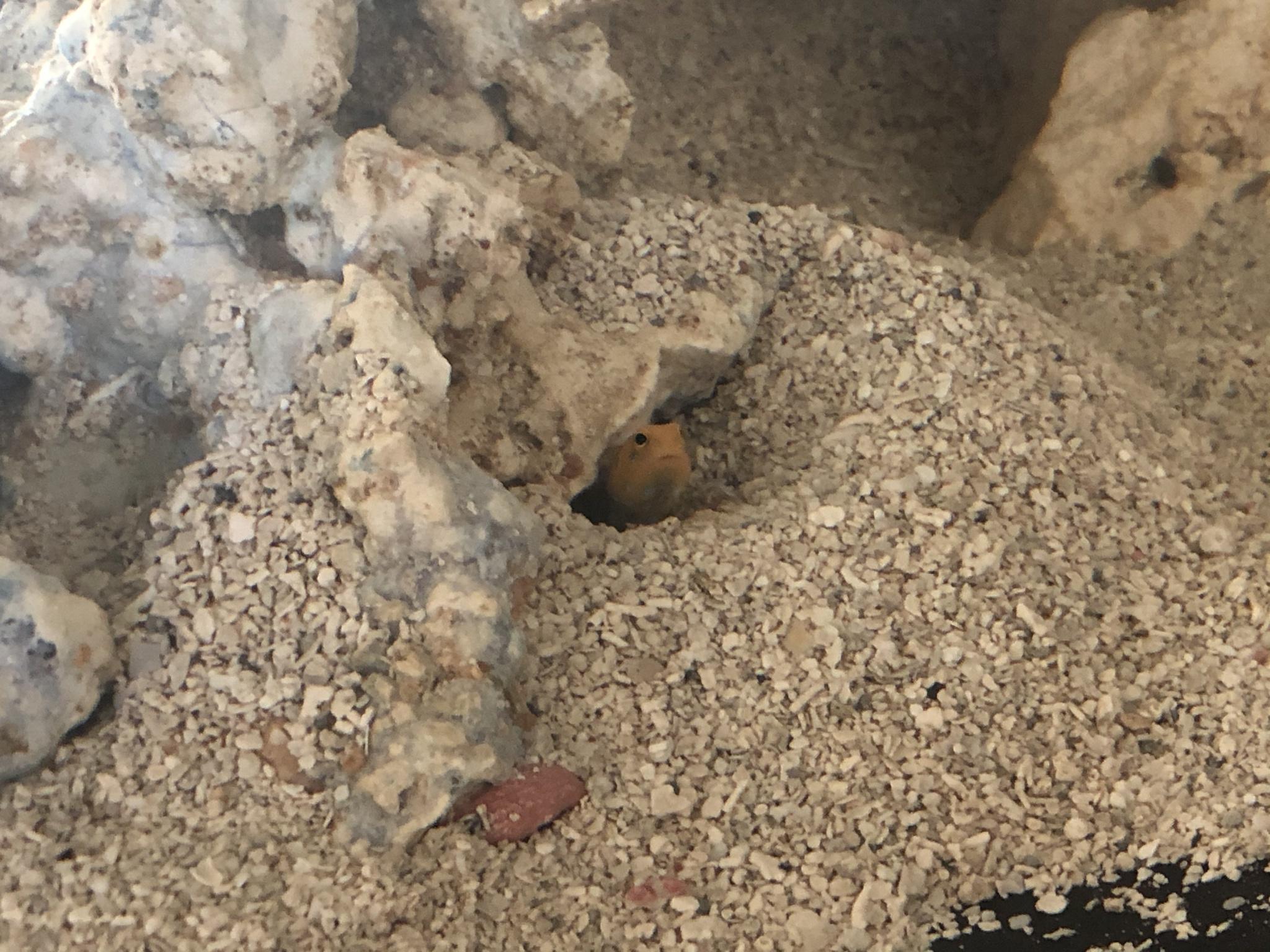 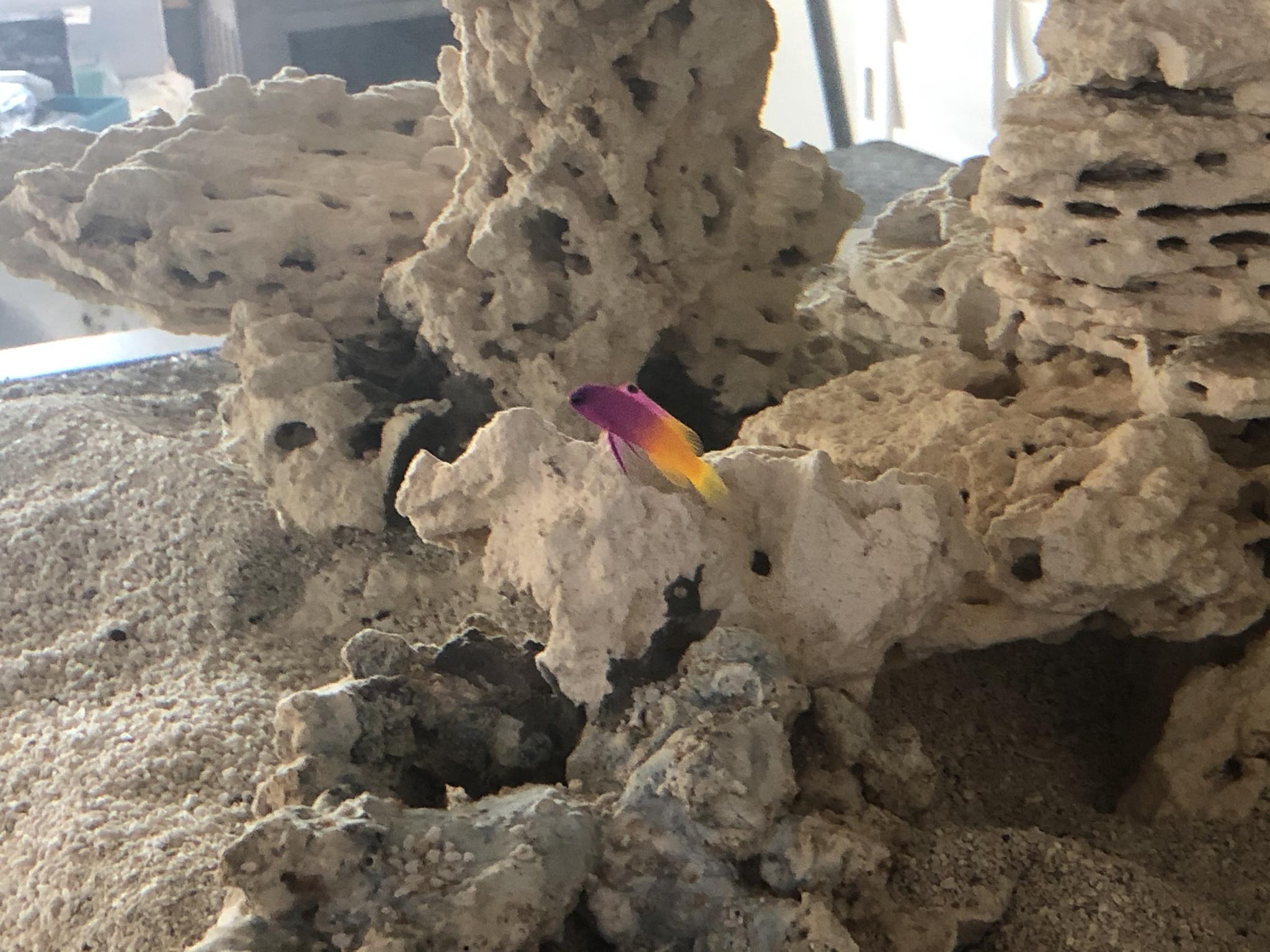 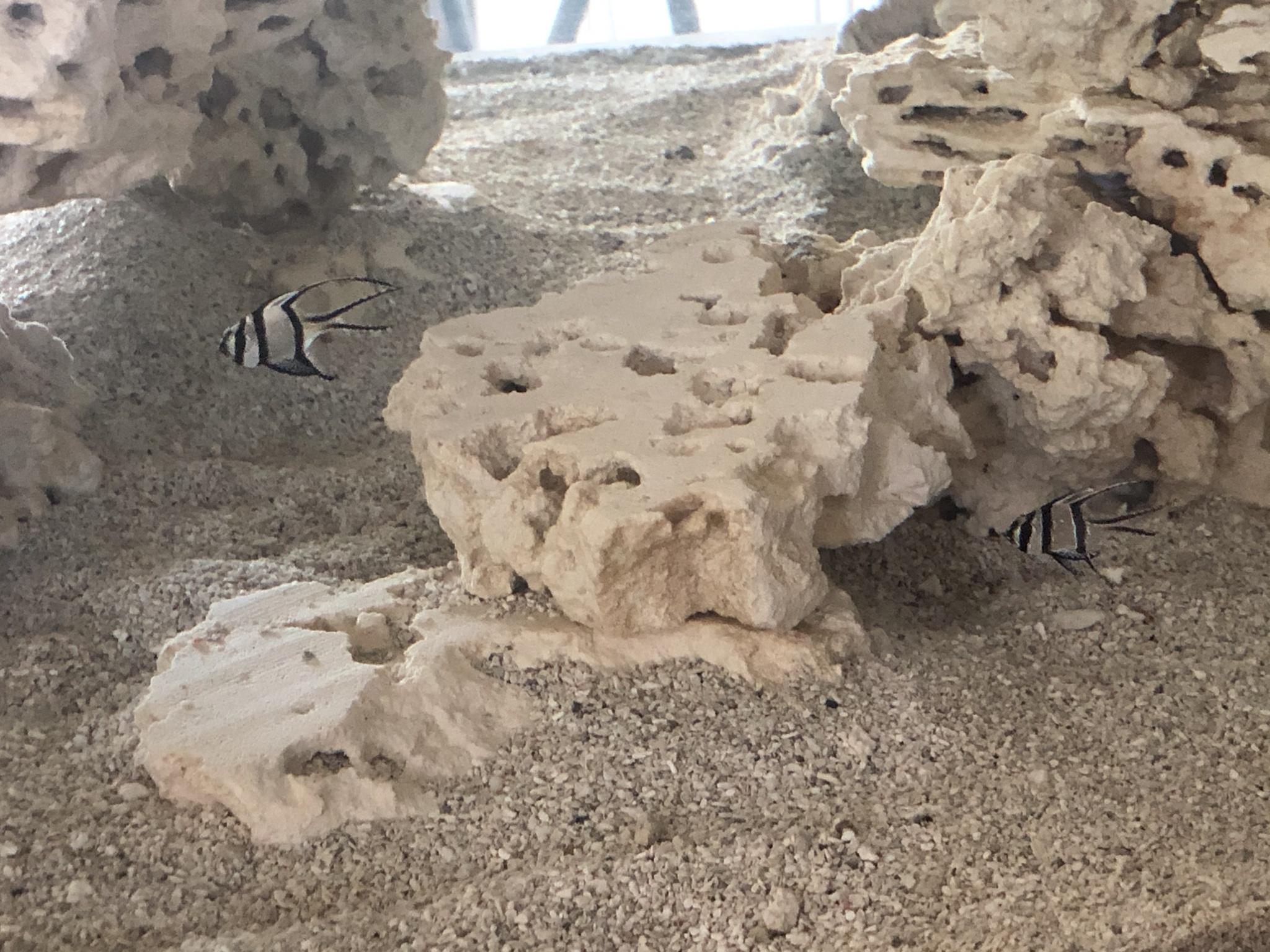