getting some QT fish on Nov 19th. been super busy so slowwww grind back up. But yolo tank is going great!

Poochaku said:
getting some QT fish on Nov 19th. been super busy so slowwww grind back up. But yolo tank is going great!
Click to expand...
nice

But what i'm excited for is a school of blue streaked cardinals!

But what i'm excited for is a school of blue streaked cardinals!
Click to expand...
that'll be cool. i love those schools of cardinals people have sometimes

only one royal grandma?

i cleaned my glass, so.. feeding video lol

http://instagr.am/p/CU6aFoiLiFI/
my flame wrasse has been male for a minute, but still isn't quite there at terminal male. he's taking his sweet time, same with my hooded wrasse. i've had both for like a year and got both as small females, so hopefully soon. i can't whine too much, they're both beautiful as is and thems the breaks if you get females

ORA has bothered to stop breeding zombie clowns or whatever for a minute to whip out some more kamohara blennies so i'm gonna grab a couple of those. beyond that i'm kinda searching for a roaops butterfly, but unfortunately my first choice, the declivis, seems borderline book fish at this point. they only come from the line islands/kiribati/christmas islands south of hawaii and between the hawaii ban and covid, it seems collection and/or flights out of there aren't happening. tinkeri is obviously a no go with the hawaii ban. mitratus are expensive from the indian ocean. flavocoronatus is a definite no go as those are like andrew sandler type fish. so i'm back to a burgess. i love me a burgess, i just thought i might splurge on this one, but oh well

my DT is going eh i guess. i think things are getting better? although i've thought that a few times before.. but coralline is coming back and the red monti for example seems less fucked. i do think i'm gonna change up my coral qt and do a nem tank with it as i've always wanted a nem, but didn't want to deal with chopped nem via powerhead. so i gotta setup a 40 breeder to use as coral qt/frag tank. i think for this iteration i'm going to try using black mollies as canary fish and see how that goes. fishless acro qt was rough so i think this will work better

got a couple new fish, 2x kamohara blennies and 2x perculas for the eventual nem tank. One of the blennies didn’t seem to enjoy the trip but he seemed better later on in the day 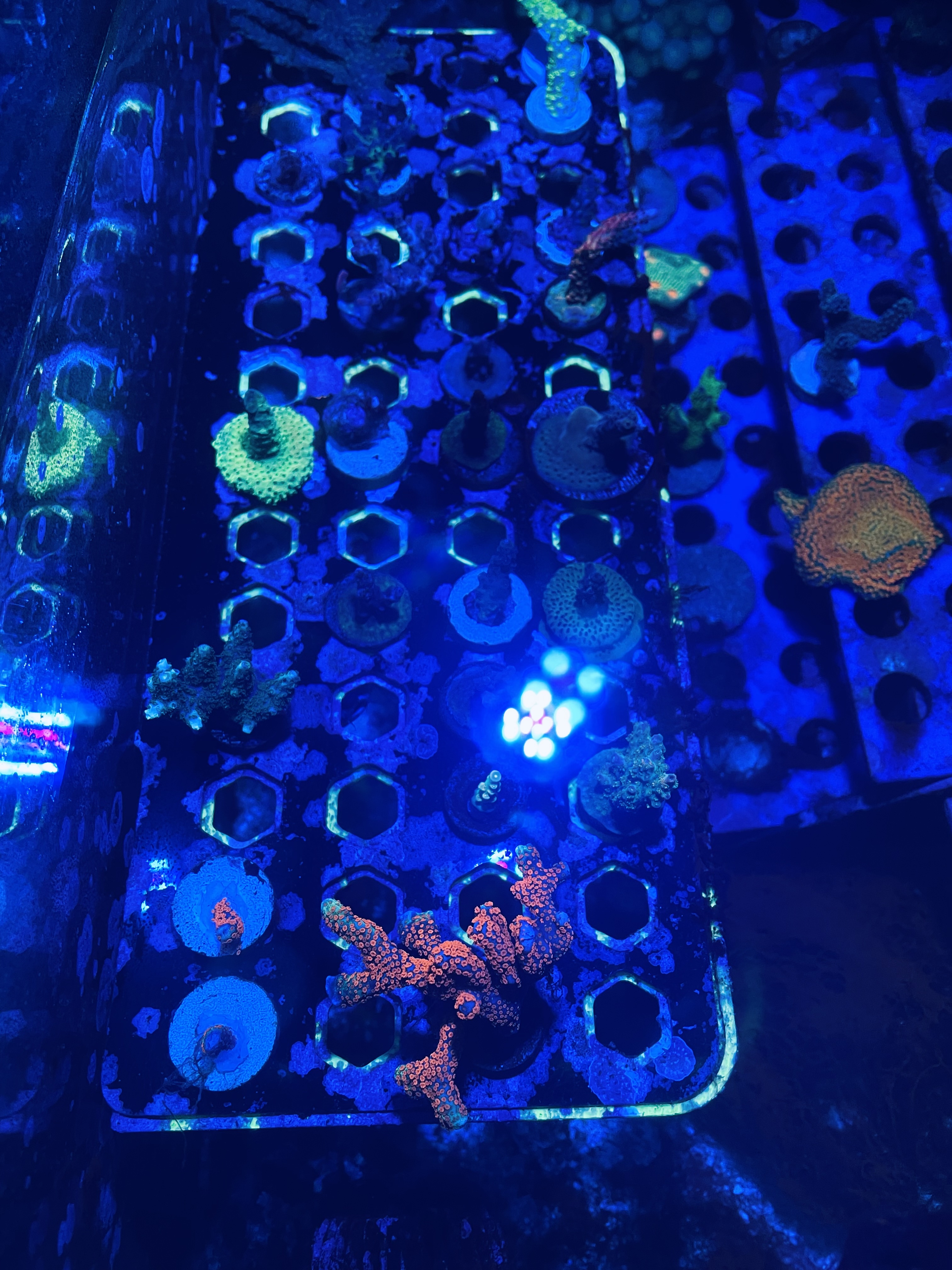 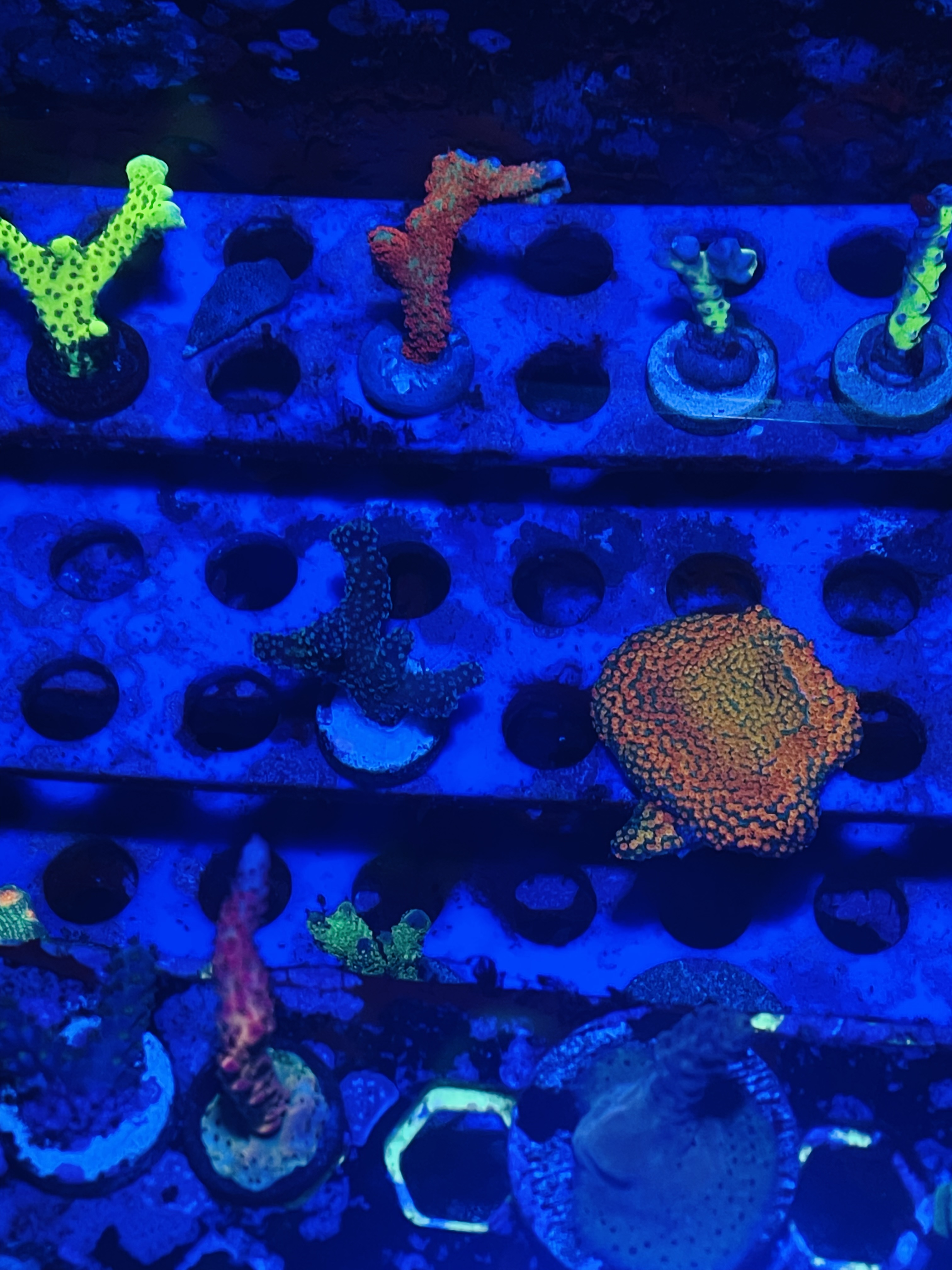 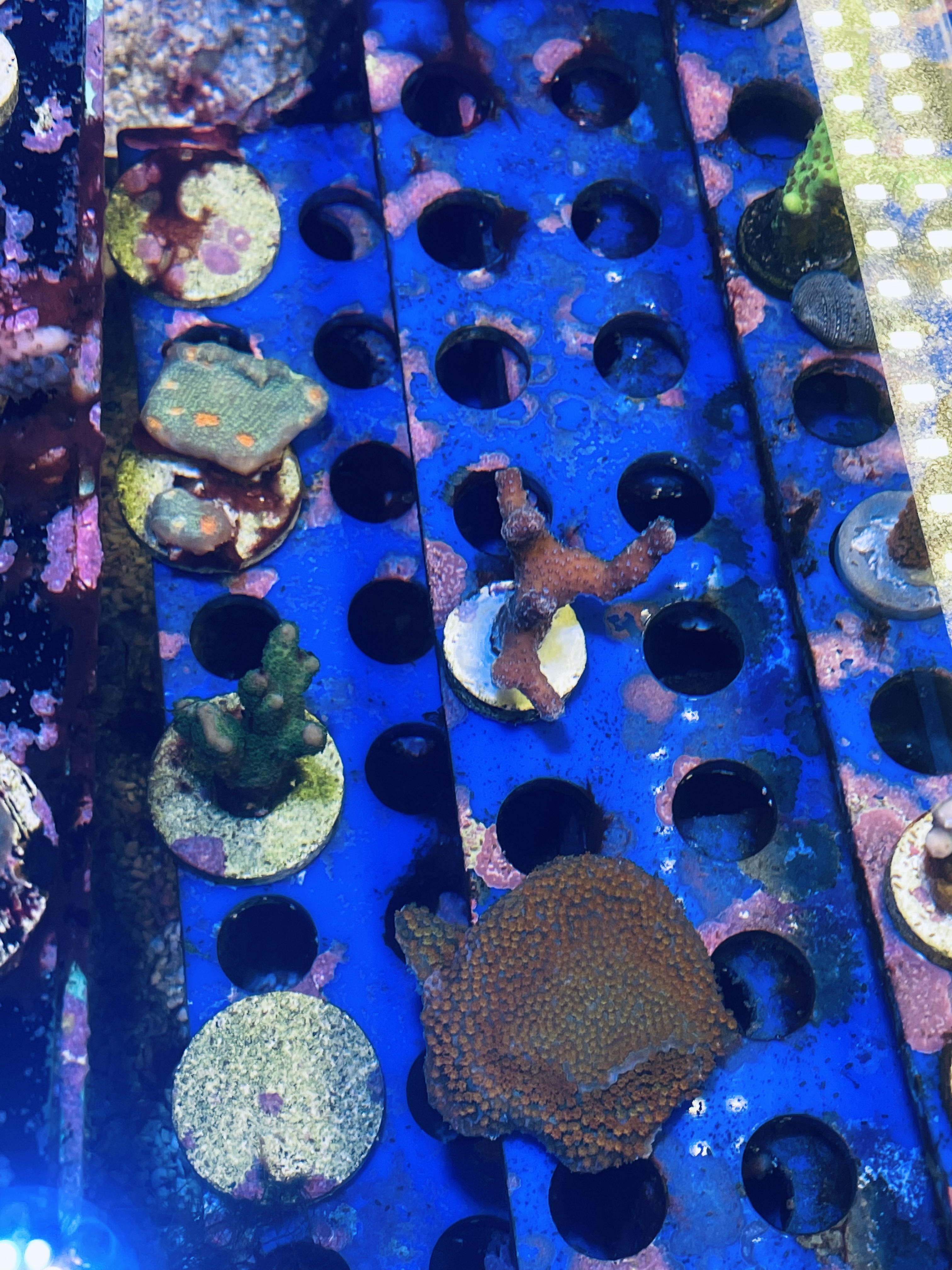 BST310 said:
Tank looks good man. Want to see this nem tank.
Click to expand...
thanks man, i'm hoping things are recovering a bit, but i did grab some backup frags just in case lol

i'm hoping to setup the 40 breeder soonish, then i can move the coral qt and turn it into the nem tank. i move at a glacial pace on aquarium projects tho so.. plus i then have to actually find a nem. seems they're everywhere, but if i start looking for one i assume they'll disappear and suddenly become $250 each

i decided to double down and since the triton test said there was tin and iron i'd do another dose of the triton metal absorber stuff. then i'm gonna do reef flux to try to f up this turf algae which doesn't seem appealing to anyone in the tank. i have let it ride for a couple months hoping time and biology would defeat it, but not yet and i have reef flux sitting around so might as well. plus my ATs doesn't do anything so nothing to kill on that front

I want to add some blennies like that one day. I'm between those and the blackline type.

You're dedicated to the QT craft man! ORA? i'd be tossing them right in, that's some will power dude. What type of anemone are you planning?

Smite said:
I want to add some blennies like that one day. I'm between those and the blackline type.

You're dedicated to the QT craft man! ORA? i'd be tossing them right in, that's some will power dude. What type of anemone are you planning?
Click to expand...
yeah i love the fang blennies, they're such cool chill fish. apparently they can be mixed a bit in larger tanks, but i really liked having the two kamoharas last time. they didn't really pair or do anything together, but also didn't have beef

haha well i'm gonna hit them with general cure a couple times because i've heard of ORA fish having flukes, but not really a real qt. i went to the lfs to see what they had and saw a purple tilefish and i was tempted, but i just don't have it in me to really qt fish even now. so over it after last winter + spring qting new stuff. i want to get a china wrasse and a burgess butterfly so i'll eventually man up, but not now..

just rbta, maybe a green one too if i can find one, those don't seem as popular. maybe xenia too lol, i miss having xenia

http://instagr.am/p/CVOSbAnhCif/
finally got some decent pics of the sunset anthias

i've wondered what i'd do if i had a 10 foot tank and apparently there it is. literally all of the fish i added a few frags like a week or two ago to test them out. the digis and birdsnest were very sensitive to the metals in my tank, so i figured a small piece of bubblegum digi would be good to try, then a brown tenuis frag, and a piece of anacropora, and another random acro. the acros also weren't happy, but had a really delayed effect thing going on.

i feel like they're doing ok, the brown tenuis has turned blue oddly enough, but polyp extension is poor, so i hesitate to add more stuff if i'm still dealing with metals issues. it's like i traded out some metals for some new stuff like tin. apparently people get tin from flexible hoses, so that's not ideal. i don't get great PE anyway, probably due to the coral nippers, so it's kinda hard to tell and i just have to be patient

i sent in a triton test on thursday, but the triton machine at unique is down for the count so they're routing tests to europe, so who knows when the results will be ready

what sucks is i feel like i got tin and iron despite me running all of these metal absorber things. so it's like what can i add to get rid of tin? lol

cyano is pretty nutty now, but it's kinda snuffing out the turf algae? so i kinda want to leave it? i tried siphoning some during my water change last night, but obviously.. not a ton of progress. i bottomed out my nitrates so that's probably why they arrived, but i figured if cyano was killing off the turf algae that works for me. i can always do chemiclean to get rid of cyano if need be. and i guess reef flux if i need to kill off the turf algae

Love how that copperband is so aggressive on the feeding clip. What is it that you are feeding?

All Delight said:
Love how that copperband is so aggressive on the feeding clip. What is it that you are feeding?
Click to expand...
LRS probably, but anything flat pack i can squeeze in there and she mows it down. rods/lrs/pe mysis

Braves up so Tuesday beer 🍺 got my triton results

some slight zinc.. ugh, but triton sells this to dose so if it stays where it's at i guess it's fine

iodine low, i used to dose that weeklyish, but got a high reading one time so i stopped.. not gonna get too cray on it

po4 absurdly high. i had tested this earlier in the week with hanna so i was wondering what this would say. it's weird, i went from .9, got it down to .5ish a couple weeks ago, did up a new bag of rowaphos, and then now it's double the amount? oh well, i suppose another bag of gfo shouldn't hurt. i wonder if the rock i added earlier in the year, not cured at all, might be leeching it? is that actually a thing? reefing campfire story to scare the kids?

turf algae plan: reef flux, but first a water change. i've been going to town every so often with a fairly rough toothbrush, but that stuff is in there like an alabama tick in some areas