Never fails bad stuff happens right before a trip or upon the return.

Tanks looked good though. What are you adding to QT?

right? idk what could've been the issue there, although i wonder if someone got aggressive on her. she was in a 55g old school so long, but super narrow with not a lot of hiding places, but not much i can do about that. i am gonna dose GC on that group since the red line wrasse and midas blenny was from before i started qting

and then i have a message in with fishotel to find me a group of sunset anthias. i don't want to mess with trying to qt anthias

Never fails unfortunately my tank broke out in velvet last Thursday right before I bailed for a weekend trip. I’ve got QT up too.

damn that sucks sorry to hear man. velvet is the worst. i've run into that stuff twice now in like a year and a half. somehow the only disease i've never had issues with is ich and i guess flukes, but maybe flukes got the moyers idk

things going semi decently. the tilefish and pintail box got delayed a day (somehow overnight shipping 60 miles was an impossible task lol) and the pintail didn't make it. he survived for a couple days and even ate a bit, so i thought maybe he'd make it, but he died yesterday

both leopards seem to be doing ok, one is definitely eating something in that video i think. the other is smaller and weaker, not sure if she's eating. but everyone else is doing ok. the tilefish is a character. rhomboid already eats pellets 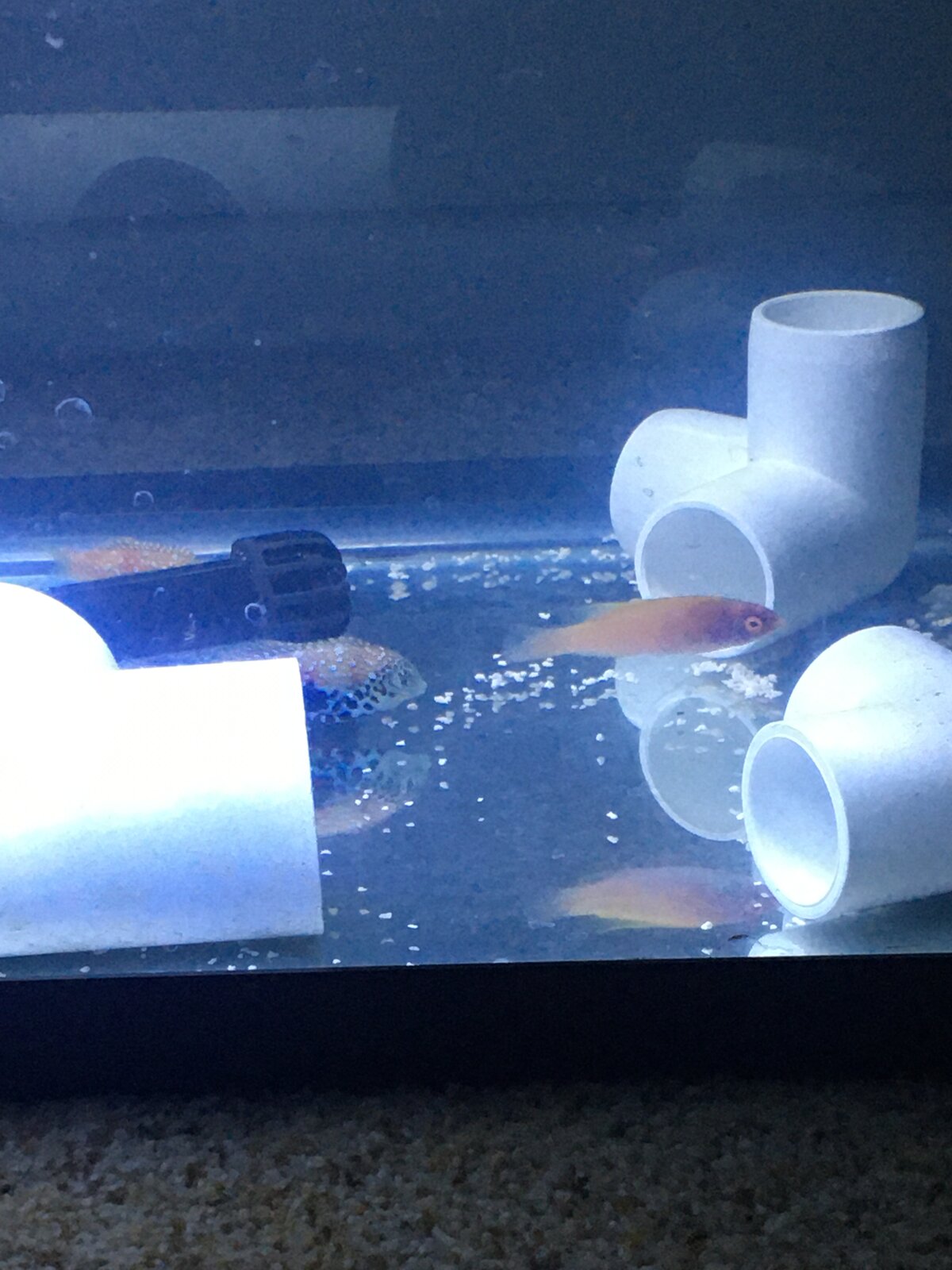 Finally done with this group. Unfortunately of the 6 that I started with only 3 made it. Pintail never seemed too hot after shipping. Blue star leopard #2 was tiny and barely came out

but the real bummer was the rhomboid who seemed fine and ate everything I tossed in there, but just up and died halfway through

and for good fun I picked up two fish yesterday a blackcap basslet and another blue star leopard. For the next go around I’m trying to condition this group a bit before starting any treatment on them so they don’t get stressed out as much

Such a bummer man, sorry to hear! In my experience pintails are super sensitive. I don't like to think of how many times I've tried but it's gotta be around 5, bullied to death easily. Did the rhomboid do any funny swim bladder stuff?

Sorry to hear about your losses, hopefully the next round goes better!

You’re just about through with your fallow period as well now too right?

I didn’t notice any odd swimming from the rhomboid, she seemed a bit timid but ime all fairies hide in stuff during qt, shrug

yeah pintails seem notorious for death by who knows what, crashing into stuff seems popular but this one scored an extra day in the bag and just never seemed right

for fallow I’ve technically been fallow since mid December, but I added a bunch of stuff to my tank so I really started the clock like a month ago. So I’m aiming to put fish back in around may 1st is the plan. Fallow is supposedly only about 45 days at 80.6 but I haven’t cranked it up to that so I’m just gonna be overly cautious and aim for 2 1/2 months of fallow

i was having issues with the sps as my alk was not dropping like at all over the course of a couple months. i didn't really know what to make of it, but most weren't dying so i figured well just tank < 1 year syndrome at least they're alive, but wanting to get to the bottom of it i rented a par meter from brs and i had my lights too high up. i figured people had par tested them at 11", 2 more inches ought to be alright. woops. so they were all at like 100ish par, so i've rectified that. but they also don't put out a solid 24x24 area like they claim so there's some seriously dark spots, especially that high up middle rock so i'm gonna budget in a radion and add that soonish. then i can have the lights perpendicular to the tank with the radion in the middle. it'll look kinda janky, but oh well. should've just gone radion to begin with.. live and learn

either way since dropping the lights down to about 9" and doing the water change my alk dropped about 1 point. and i see some clear growth on the acros so that's cool. growth good, dead not good

on my fish restocking i was able to get a couple more fish recently so i got them eating and started hybrid ttm on them, a blackcap basslet, a sunburst anthias, and a sharknose goby.

i really want another leopard and a tamarin wrasse, but those have been hard to find. i asked a lfs to get them, i called to confirm they had them, drove 45 min to get there only to be told they forgot what tank the leopard wrasse was in and apparently the owner liked the china wrasse so much he just took it home for himself. so i drove 1 hour home empty handed LOL. suffice to say, fuck that place

after finishing my last ttm my skunk tilefish started like literally going nuts. he was porpoising out of the water for hours on end


that was looking real spinal injury status so i figured i was gonna lose him for sure, but i turned the flow down and just left him alone and he perked back up. i took this earlier today


so that trio is looking good, all 3 eat really well. the assessor is the lone holdout on pellets, but the leopard and tilefish are mostly cool with them

and lastly, i was on the lookout for some QT'ed sunset anthias psuedanthas parvirostris and finally found tsm was getting some in so i ordered 4 females and 1 male, those will be done with qt and arriving late april. i'll toss them in a tank and observe them for a couple weeks. tsm is kinda tough to communicate with via email, but maybe i can add to that order a bit.

i do have some stuff i'd like to add down the road. kamohara blenny, starcki damsel, a roaops butterfly, and once the coral grows in a bit i'd like to try a less reef safe butterfly. not sure what kind yet, but pearlscale is currently speaking to me. miliaris or fremblii would've been cool, but hawaii closed so that aint happening. i really love falculas and their pacific sister, but those might be a bit too risky for me either way i have a solid year or two to decide on that

my flame and hooded wrasses were getting bullied by some combination of my multicolor angel, midas blenny, and/or orangeback fairy so i had to do some late night wrasse hunting. luckily they like sleeping in these random pvc pipes i have in the tank so i just netted the entire pipe out and dumped them in the tank with my tilefish and leopard


they were hiding constantly so idk if they would've made it another month before going back in the DT. now they're out and about

Glad to see almost all is going well!

Looking forward to seeing all these in the tank so close.

really looking forward to not qting fish and messing with corals now. i think i'm like a 60/40 fish over corals guy, but fish qt is just so draining. and at least when coral dies i don't feel bad really. just hurts the wallet. fish qt legit makes the hobby not fun tbh

the tank is 1 year old in early june actually so i got a bit lax on the updates somewhere along the way. i figured i'd take a video before i added the xr15 and turn the reefis perpendicular. hopefully that'll give me pretty decent full coverage

my fallow period ends may 3rdish so i'll start adding fish back in finally. hopefully now that i take more precautions than freaking public aquariums i won't have to deal with that again

coral growth is slow, but at least nothing has died lately. things seemed to be growing well for awhile and then alk consumption stopped again a couple weeks ago, not sure why. i did have a copper reading on my last icp test and i noticed my octopulse pumps have a seam separating (or maybe it's just algae growing in there) on the in tank magnet portion, but i emailed coralvue and they said the magnets are made of iron so it wouldn't be that and it's probably just my salt. shrug. i have cuprisorb somewhere around here so i'll add some of that as i'm not trying to have even low levels of copper in the tank

the lack of alk consumption might have to do with my ATS which went offline when the pump i use died for it and i was lazy about cleaning it and getting it back running. it takes awhile to start regrowing the algae too so my po4 went from .1 to .4 which is weird because i feed lightly with it being fallow. or perhaps the lack of fish poo in the tank is finally getting to the corals, it has been fallow since mid december

The wonders of fish poo! I’ve had fish back in my tank about a month now everything looks so much better.

Keeping my fingers crossed for you, hope your fish troubles are over.

BST310 said:
The wonders of fish poo! I’ve had fish back in my tank about a month now everything looks so much better.

Keeping my fingers crossed for you, hope your fish troubles are over.
Click to expand...
awesome man! did you do anything during fallow to ensure it went away? i'm like paranoid about anoxic zones and the velvet somehow surviving, but i think i'm just being legit paranoid

glad to hear things are going well for you, beating velvet feels good despite the work

mattyzang said:
awesome man! did you do anything during fallow to ensure it went away? i'm like paranoid about anoxic zones and the velvet somehow surviving, but i think i'm just being legit paranoid
Click to expand...
I didn’t to be honest. I completely understand how you could be overly cautious, especially with the troubles you’ve had.

It sure is and great to see some “life” in the tank. Like you I definitely like the fish a little more than the coral.