How to Introduce your Self

The name is Tyrone, real name no gimmicks, I reside in Norf Norf Hollyhood. Been out of the SW game for too many moons. Though I recently got back into the Fresh in 2012, doing the planted biz from iwagumi to jungle. Now I want to dip the tip into some salt. I'm deciding to start off in the nano end, since I already have one waiting to get wet. It's a 20-23 gal low-iron AquaH20 rimless that I picked up from my LFS, Pet Supreme, for a helluva deal. Pretty clean. It's similar to the Cadlights Zen 23gal. It sits on a modified IKEA stand that you see some people use, mimicking the ADA style with the DIY light hanging kit made by 1/2" conduit. So that's pretty much the skin of things. Later down the line I plan on upgrading the stand to one made by your very own Aaron of SPS Corals in La Caada. I'm slowly piecing together the rest of the guts and bones. This is what I have so far:

I recently just sent out an email to AdvancedAcrylics for a custom sump design I had in mind. After that I'll be looking into a NanoBox Duo. Things like skimmer, reactor, chiller/fans, heater, controller etc. will follow. Once that is all bagged, I will begin my build thread.

Now that I'm no longer lurking in the trenches, I'll be scouring the surface to eat your brains.

1. Junior Gonzalez
2. Location is Montclair, CA
3. 10 gallon biocube. Nothing much upgraded. Pump, and LED's (EcoRay 60D)
4. I have always wanted to have SW tanks, never had the courage to start up till I got my free biocube.
5. Just started in December of 2015
6. I would like help with any good, affordable upgrades I could possibly do to my tank. Looking to get a bigger tank soon, maybe 20-40 gallon.
Currently in my tank, bicolor hammer, frogspawn, couple zoa's on rock given to me by my gf's experienced uncle, ricordia, small cabbage, pair of ocellaris clowns, sexy shrimps and hermits.
Thanks guys. Hoping to learn more soon.
R

I have never had a SW tank before but am in the researching and acquiring phase of my build. It will be a 22g low iron Mr. Aqua tank w/ a 30g sump. Been joining different forums to get good ideas and had no idea this one existed until a member on another forum mentioned it. Glad to be here and hope to learn a thing or two.
M

Mario in Riverside here. New to the hobby and jumped into the deep end a couple days ago. 135 gallon tank. My sister has an 80 gallon freshwater tank but I had to bigger and of course saltwater. Although I've been reading as much as possible about reef tanks (water quality, inhabitants, etc, etc) and I found this forum a couple of days after starting, I feel as if I'm already behind on the learning curve. That said any and all helpful tips, advice would be much appreciated.
C

1. Timothy
2. Rowland Heights, CA 91748
3. I have 55 gallon long tank with 1 one spot foxface, 2 spotinchus clownfish, 1 threestrippes damsel, and 1 bicolor blenny and 2 banggai cardinalfish (currently in qt). Dimension is 48x13x20
4. I've had freshwater tank since I was 5 years old. I've had discus tank in Indonesia. Then I've moved to California and my dad's friend gave me her 25g tank which I still have it. I've been in the reef tank for 2 years.
5. 2 years
6. I need help and any useful information. I also will help you with the info based on the experience and on info i read on the forums
L Hello reefers.
My name is Pedro from the perris area.
Currently running 120 gallon fish only tank with 4 chromis, a wrasse and a dog face puffer. I had a clown that was recently killed by the puffer. Looking for a good home for him and looking to start adding some corals. Have had the tank for about a year and currently trying to improve water quality and parameters to start adding corals. Any help is appreciated.

Sent from my SM-N920T using Tapatalk

pedrosanchez1973 said:
Hello reefers.
My name is Pedro from the perris area.
Currently running 120 gallon fish only tank with 4 chromis, a wrasse and a dog face puffer. I had a clown that was recently killed by the puffer. Looking for a good home for him and looking to start adding some corals. Have had the tank for about a year and currently trying to improve water quality and parameters to start adding corals. Any help is appreciated.

Sent from my SM-N920T using Tapatalk
Click to expand...
Picture?

What are you using for filtration?

What are your water parameters?

You might want to trade the puffer in at your LFS for credit.

Hey reefers!!
Name is Ricardo but all my friends call me Rico.

This tank is 3 months old today!

I've been in the reefing hobby on and off for the past 4 years but this is the furthest I've gotten so far lol, the reason I got into it was I used to be into breeding freshwater cichlids like flowerhorns and frontosa but got tired of it. I didn't want to give up fishkeeping altogether so I tried a saltwater tank to challenge myself and I never looked back. Now I'm coral obsessed and don't really even mind fish lol.

As for help right now I am dealing with constant alk swings as well as salinity swings due to me not having an ato or auto dosing pumps. Also having a phosphate issue but I seem to have that on a steady decline. Two weeks ago it was 1.22, last week tested .92 and yesterday we got .35 so hopefully we can keep it going down with the gfo reactor, unless anyone has better advice?? Here are my test results for the day so you can get an even better picture of my system.Alk 2.5-7.0
Calc 500
Mag 1600
Phos .32
Nitrate 0
Nitrite 0
Ammonia 0
Ph 8.2
Salinity 1.026
Temp 78

Glad to be here and excited to meet some new faces! 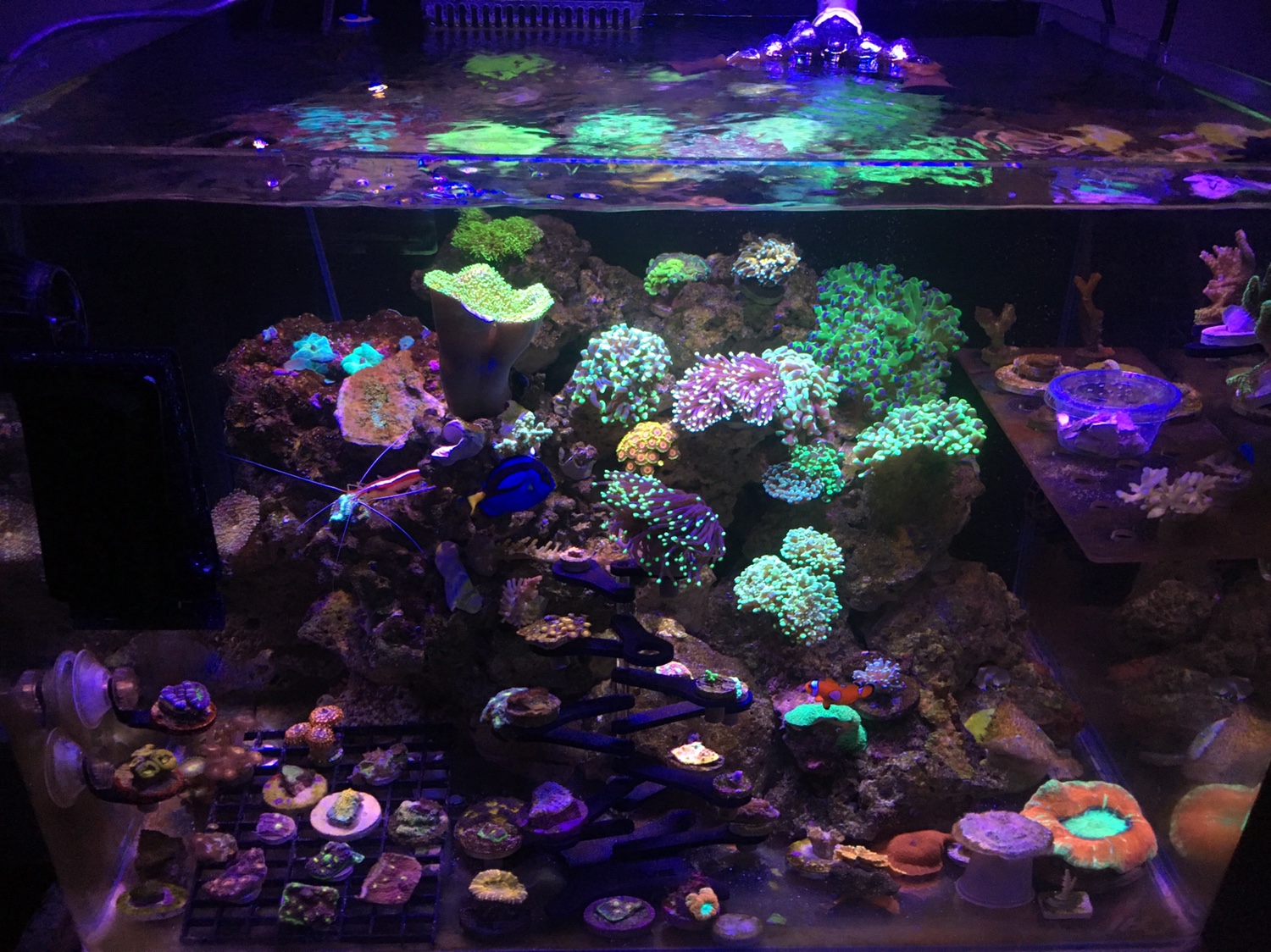 What are you using for filtration?

What are your water parameters?

You might want to trade the puffer in at your LFS for credit.
Click to expand...
Sorry for late response. I'll go into full details and upload pics as soon as I figure this thing out. The problem I'm having is mainly my doing in regards to maintainance. At the moment I'm working on building an rodi and salt water prep station . I just purchased 2 65 gallon norwesco tanks that will be used to house the two waters. I will post pics on this build. Once I complete this and the puffer is gone I will redo the tank to accommodate Corals and reef safe fish.

Hi SoCali Reefers,
Tom from Gardena, have had freshwater tanks before but the wife and I decided that two dogs and a drag racing schedule were not enough so we started a Red Sea Reefer 170 mixed reef tank in late December 2018.
We have a few softies on their own rock and are adding some LPS corals slowley, fish are in QT for another 2.5 weeks as I did my reading a little late and set up the QT a few weeks after the DT so fish introduction was delayed. A starry blenny and 3 green chromis are the first fish.

I know I'll have questions, thanks in advance!

Name would be nice Victor
2, A location will also help Santa Ana Ca
3, Tank size, dimension, equipments and inhabitants
Reefer 350, 2 Hydra 26, maxspect duo 9k return with maxspect GYRE xf230. Plenty of zoas and Ultra Acans with 9 fish
4, A history about your self and how you started with this hobby started with a small 24gal cube tank 7 years ago
5, How long you have been is this hobby 7 years
6, Let us know if your need our help with this hobby not at the moment

1, Name would be nice
Joshua
2, A location will also help
Los Angeles, Ca
3, Tank size, dimension, equipments and inhabitants
120g tank with raidons g4 pros and apex that supports a mixed reef with lots of zoas, monities and some SPS.
4, A history about your self and how you started with this hobby
Had a tank for several years in San Luis Obispo from 1999-2003 but had to break it down when moved and 5 years ago got back into the hobby and fully addicted.
5, How long you have been is this hobby
8 years in total
6, Let us know if your need our help with this hobby
Would like to learn how to ship coral I have propagated from my personal tank in order to help support a 187g dream build.